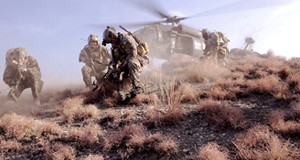 The U.S Army’s Future Vertical Lift (FVL) program will provide a family of vertical lift platforms that deliver next-generation capabilities and address aviation capability gaps against future peer and near-peer adversaries. All that in a survivable and lethal package.

Non-permissive environments characterized by expanded adversarial areas of influence made possible by longer range, more precise detection, tracking, and engagement systems, high levels of competition within the cyber and information domains, and the emergence of highly sophisticated manned and unmanned systems trolling the battlefield evoke an image of future warfare that significantly raises alarm due to added battlefield complexity and a corresponding need for modernization. Ultimately, warfare is already complex as it is, dealing with future complexity is the challenge.

The impetus to search for that next pre-paradigmatic advancement in warfare to add to our body of knowledge as a ground force and overall military is alive and well within Army Futures Command (AFC) and its Cross-Functional Teams (CFTs). This is evident through on-going efforts to develop Multi-Domain Operations concepts and innovative material solutions to address the challenges of tomorrow’s battlefield. AFC leads the Army’s future force modernization enterprise. The Command assesses and integrates the future operational environment, emerging threats, and technologies to develop and deliver concepts, requirements, future force designs, and material solutions to address the U.S. Army’s modernization needs.

The Army initiated a realignment of modernization responsibilities in October 2017. This involved the establishment of a pilot program consisting of eight CFTs, one of which is the Future Vertical Lift Cross-Functional Team (FVL CFT). CFTs are now in full swing developing warfighting requirements, informed by experimentation and technical demonstrations, through teaming and rapid feedback from within Government, Academia, and Industry.

Future Attack Reconnaissance Aircraft Capability Set 1 is a light-weight and small scout aircraft which the U.S. Army will employ for the purpose of reconnaissance, security, and offensive operations against peer or near-peer competitors in contested and adverse conditions, including difficult terrain and dense urban environments. This aircraft will provide a marked increase in speed, range, survivability, lethality, and sustainability over current and past U.S. Army rotorcraft due to a “clean-sheet” design and recent advances in technology.

FVL platforms will integrate a common “Digital Backbone” across multiple platforms to provide rapid integration of advancing technologies to reduce the time it takes to field and employ cutting-edge capabilities. Development of a modular open system architecture for FVL platforms will enable us to outpace future adversaries.

Manned-unmanned teaming (MUM-T) is highly useful for warfighters but is a concept that must evolve. No military force has as much experience fighting manned and unmanned platforms in tandem than the U.S. Army. MUM-T pairs a manned aircraft such as an AH-64 Apache with an unmanned, remotely controlled aircraft such as a RQ-7 Shadow. Levels of interoperability to manned crew-stations within the AH-64 Apache include everything from Video Down-Link feed from the Shadow to control of the actual Shadow sensor to control of the Shadow itself. This capability provides unique tactical advantages for commanders by enhancing key attributes required to conduct tactical enabling and offensive operations. Key attributes include surprise, protection, extended station-time, and making initial contact with the enemy with the smallest force possible. However, MUM-T, with its one-to-one correlation between manned and unmanned systems, or in the example previously mentioned, one-to-one correlation between a single AH-64 Apache and a single RQ-7 Shadow, limits an Aviation formation’s capability to mass its unmanned platforms and expand its areas of influence. A single unmanned aircraft can only influence so much.

The Future Vertical Lift “Eco-System” moves beyond the limitations of one-to-one correlation offered by MUM-T and exploits a one-to-many correlation offered by advanced teaming. The revolutionary nature of the Future Vertical Lift “Eco-System” resides in a game-changing capability offered by connecting a Future Attack Reconnaissance Aircraft to a heterogeneous network of multiple remotely controlled or automated unmanned platforms. The development of this capability is unprecedented and has particular application to our emerging Multi-Domain Operations concepts and doctrine. A permutation of the Future Vertical Lift “Eco-System,” in line with our Air-Ground Operations tradition, which offers even greater capability in the future is a networked formation of manned and unmanned air and ground vehicles connected to fully autonomous unmanned air and ground platforms. The tactical and operational advantages offered by employing the Future Vertical Lift “Eco-System” include all the advantages of MUM-T plus the capability to rapidly synchronize and converge what would otherwise be the activities of disparate unmanned platforms, to include electro-optical/infrared reconnaissance and Electronic Warfare activities, into a singular effort aimed at penetrating a contested area, testing the enemy’s defenses, and establishing conditions to exploit an enemy seam or gap all while enhancing a tactical commander’s ability to dictate the terms of human contact with the enemy. The Future Vertical Lift “Eco-System” consisting of the Future Attack Reconnaissance aircraft, advanced unmanned aircraft systems, air-launched effects, and future munition is the Reconnaissance-in-Force formation of the future will provide aviation formations, in support of ground maneuver elements, the capability to rapidly task organize, or coalesce and splinter, in order to adapt to and operate effectively within what we consider today as the highly dynamic and ultra-competitive battlefield of tomorrow.

Integration within a Proven Force

FVL CFTs, other CFTs, the HQDA G-2 Intelligence, Surveillance, and Reconnaissance Task Force, and the Army Futures Command Artificial Intelligence Task Force and are working in concert with other branches of the military, government partners, academia, and industry to materialize this innovative approach to army aviation employment and maneuver warfare. Many historians argue that we never got it right and that we will never get it right preparing for the next war. Conversely, preparing for warfare, modernizing, and enhancing combat readiness are military virtues with far-reaching effects. Efforts to prepare, modernize, and train will bear fruit on other battlefields. For example, training and modernizing for combat operations in the Fulda Gap manifested itself in combat operations during Desert Storm when we were able to liberate Kuwait in only 100 hours. We may never get it exactly right preparing for the next immediate war but, at least within the mind of every warfare practitioner, preparation takes us favorably into the future regardless of who our adversaries are. The Future Vertical Lift “Eco-System” will undoubtedly take us into the future and prepare us for the complexities of future battle.