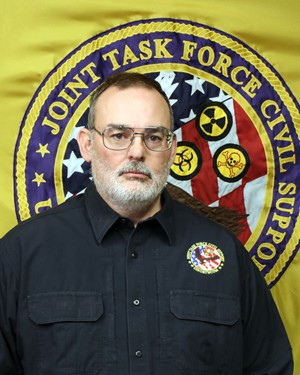 Mr. Jeff Theall is the Information Technology Services Division Chief as a DoD civil servant for Joint Task Force-Civil Support (JTF-CS), United States Northern Command (USNORTHCOM). JTF-CS is the nation’s only standing CBRN JTF and leads the way in such expertise for America’s CBRN Response Enterprise. He formerly served on active-duty for the U.S. Army and then U.S. Air Force providing law enforcement as well as IT communications services.
Mr. Theall’s varied career in security and communications has provided him with life-changing experiences including witnessing the Mt. Pinatubo volcanic eruption while stationed at Clark AB, Philippines; serving in Operation Iraqi Freedom; supporting the 2010 Winter Olympics in Vancouver BC Canada; and assisting with Operation Tomodachi after the devastating tsunami and nuclear incident at the Fukushima Daiichi nuclear power plant.

S&B: What is the primary mission set of the Joint Task Force-Civil Support (JTF-CS)?

Mr. Theall: The JTF-CS, a joint command comprised of all services, anticipates, plans and prepares for Chemical, Biological, Radiological and Nuclear Defense Support of Civil Authority (CBRN-DSCA). When directed the JTF-CS deploys within 24 hours of notification to command and control DoD forces, the Defense CBRN Response Force (DCRF), conducting CBRN response operations in order to save lives, prevent further injury and provide temporary critical support to enable a community’s recovery. The DCRF does this primarily by conducting Urban Search and Rescue (USR), medical triage, and patient evacuation for those suffering the effects of a nuclear detonation, biological attack or some pandemic where time to respond is critical. The DCRF is approximately 5,200 forces. They’re only employed when the incident overwhelms the civil capacity and a quick but capable response is required.

S&B: What part do tactical communications play in JTF-CS response during a disaster response event?

Mr. Theall: The JTF-CS anticipates either a large part of the civil communications infrastructure in and around catastrophic CBRN events to be either destroyed, damaged, saturated, or some combination of all three, making reliance on tactical communications a must. A nuclear detonation will most likely cause a great deal of destruction and damage to any localized area but a pandemic might cause a saturation of services due to the need for information by people in large metropolitan areas subject to oversubscription from private telecommunication providers. A family of four could have six to eight cellular devices alone. Having an organic and reliable service to command and control with is paramount and nothing beats tactical satellite (TACSAT) communications for timeliness and security. Mobile User Objective Service (MUOS) is the next generation of TACSAT service designed to provide commanders an immediate means to communicate regardless of location or infrastructure. Legacy TACSAT services such as dedicated single channels, Demand Assigned Multiple Access (DAMA) and Integrated Waveform (IW) services are being replaced by the more capable, and frankly newer, MUOS Wideband Carrier Detect Multiple Access (WCDMA) architecture and service.

S&B: What is the baseline form and function of MUOS?

Mr. Theall: MOUS is a system consisting of a constellation of satellites, currently five, in geosynchronous orbit over the equator, connecting radios to ground stations providing network services. These services can just be secure voice or actual non-secure internet protocol router network (NIPRNet) and secure internet protocol router network (SIPR) services. Because of the size of the carriers, the actual bandwidth between the terminals, satellites and ground stations, voice quality can be up to “recognition quality,” similar to your normal cell phone. Of course, the transmission travels many thousands of miles so you still have a delay. Because of the network design, you also do not have to request new access when you change locations. For example, a unit training in the continental U.S. using radios programmed for the MUOS service can move to another theater and use their radios without having to resubmit a request. In areas with coverage provided by multiple satellites, you can simply point to the satellite providing you the better coverage. There’s a small delay in acquiring the new satellite and shouldn’t be done in high-intensity situations unless you are forced to. Additional benefits include the Regional Satellite Support Centers (RSSC) increased ability to detect and locate interference. There are many positive upgrades to MUOS, however, MUOS/WCDMA requires more planning and technical proficiency than previous systems.

S&B: What are some challenges associated with MUOS?

Mr. Theall: With increased capabilities such as larger data capacity, access to multiple satellites, and “one-time programming” comes increased complexity and increased planning. Like any TACSAT service a satellite access request (SAR) must be submitted. A request for profiles, typically corresponding to how many radios you need to program into your network, must also be requested. Finally, the product of the profile request must be configured into each individual radio prior to accessing the service. With units allocated to JTF-CS to make up the Defense CBRN Response Force rotating annually, this layer of complexity is challenging. MUOS networks also take more cryptographic keys than legacy services creating more administration from a communications security (COMSEC) perspective.

S&B: Are the challenges worth it?

Mr. Theall: Time will tell but the end state is promising, not to mention there’s really no going back. The current fleet of satellites are past their expected life span. The MUOS service will allow radios to become more like network devices. They will be assigned actual phone numbers capable of operating on the Defense Switched Network (DSN) from any location in the world. That’s pretty powerful. In a Defense Support of Civil Authorities (DSCA) role, knowing you can make a DSN “phone call” from radio to radio in your unit any time, any place provides confidence to commanders and communicators. There’s also less fumbling around a communications and electronics operating instruction (CEOI) looking for a call sign for a unit you’re not habitually operating with when time is a factor. Regardless, we’re pretty dependent on cellular communications and MUOS allows our newer radio systems to operate more like a cell phone.

S&B: What part do the Navy and JTF-CS sailors play in supporting communications?

Mr. Theall: The U.S. Navy is the lead agency for DoD satellite communications (SATCOM) and controls the current fleet of satellites from the Naval Satellite Operations Center (NAVSOC) at Naval Base Ventura County, Point Mugu, CA. They rely on it for obvious reasons and the Petty Officers assigned to JTF-CS bring this unique communicators perspective the other services may not fully realize. They tend to be especially adept at configuring the multiple access waveforms such as DAMA so their ability to pick up MUOS is accelerated. They also understand the limited communication options and challenges operating at sea provide, so they’re quick to realize the importance of TACSAT and able to quickly learn the system. For example, ships traversing the Atlantic or Pacific oceans will have to plan their comms from port of embarkation to their ultimate destination. This level of understanding is critical when access to more traditional means of communicating, such as cell phones, the internet, or email, are unavailable. MUOS has the power to overcome these obstacles when properly employed.