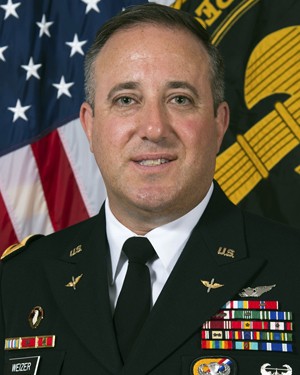 COL Paul I. Weizer currently serves as the Program Executive Officer Rotary Wing Systems at U.S. Special Operations Command (USSOCOM) headquarters at MacDill Air Force Base. He recently served as the Director, Armaments Cooperation for the U.S. Mission to the North Atlantic Treaty Organization (NATO) in Brussels, Belgium and previously served as the board-selected Product Manager for Special Operations Forces Training Systems, Program Executive Office for Simulation, Training and Instrumentation in Orlando, Florida.
COL Weizer enlisted in the Army in 1990 and served as an Air Traffic Control Specialist for two years before accepting the “Green-to-Gold” scholarship to attend the Army ROTC program at the University of Tampa (Class of ‘94). He graduated with a Bachelor’s degree in Business Management and was commissioned as a second lieutenant in the Aviation branch. He completed the resident aviation basic and advanced officers’ training courses and has served as a platoon leader, executive officer, battalion logistician and company commander.
Upon completion of his tour as company commander, COL Weizer transitioned in the Army from aviation to material acquisition management. As an Acquisition Corps officer, he has served as an operational test officer, contract management officer, systems integration officer, assistant project manager, Department of the Army systems coordinator, theater acquisition advisor, product manager, and joint/interagency land armaments advisor. He has completed the University of Tampa MBA program (Class of ‘11) and the National Defense University’s Eisenhower School Master of Science in National Resource Management along with the Defense Acquisition University’s Senior Acquisition Course concentration (Class of ‘17).

Armor & Mobility spoke recently with COL Paul Weizer, PEO Rotary Wing Systems, USSOCOM, regarding some focus areas SOCOM is targeting for sustainment and advancement of critical Future Vertical Lift (FVL) capability so that it’s there when and where SOF operators need it.

A&M: With future long-range assault a focus area for future vertical lift, how is SOCOM working to influence capability for SOF application?

COL Weizer: The Systems Integration Management Office (SIMO) of the Special Operations Aviation Command has been conducting experiments within the Future Long Range Assault Aircraft (FLRAA) lines of effort to assist the future vertical lift cross functional team in developing doctrine, tactics, techniques and procedures utilizing future technologies in support of multi-domain operations. This office provides risk reduction along the spectrum of capability technology maturation before it is inserted wholesale into the service-led program. SOCOM is also investing early into the design phase of the program to ensure SO-P equities get baked into the baseline platform.

A&M: From a future attack recon perspective, how is SOCOM looking to transition to future vertical lift from MH-6 Little Bird?

COL Weizer: SOCOM will continue to re-validate its requirements and current capabilities as FARA (The Future Attack Reconnaissance Aircraft program) develops into production aircraft. SOCOM will work hard to ensure SO-P equities are engineered into the early FARA candidates, but it is too early to determine whether the mission(s) currently conducted by the A/MH-6 “Little Bird” are suited to be conducted by the production FARA platform. Ideally, some or all of the current “Little Bird” missions could/would be assumed by one or more of the future vertical lift platform variants.

COL Weizer: SOCOM relies heavily on the Services to meet its budget goals. The more SOCOM can mainstream SO-P requirements, the less it must utilize its own limited budget to develop and deliver capability. PEO Rotary Wing systems utilize a variety of business initiatives and reforms to get the most capability to the SOF Warfighter for the least amount of investment. All of these efforts place mission accomplishment at the forefront of our planning and execution of SOF materiel development and delivery.