Fight The Enemy, Not The Plan 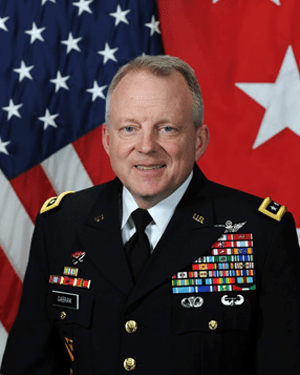 Lieutenant General Douglas M. Gabram assumed command of U. S. Army Installation Management Command January 22, 2020. He is responsible for delivering quality base support from the Strategic Support Area enabling readiness for a globally responsive Army at 75 installations across the world.

He most recently served as the Director for Test at the Missile Defense Agency, responsible for planning, programming, budgeting, and implementing a comprehensive Ballistic Missile Defense System (BMDS) test program to field an integrated and effective capability to joint force.

His combat deployments include two tours to Afghanistan, Operation Enduring Freedom/Resolute Support with the 1st Cavalry Division as the Division Chief of Staff, Deputy Commander, and TAAC-South Commander; three tours to Iraq as part of Operation Iraqi Freedom, twice as a Battalion Commander with the 101st Airborne Division (Air Assault), and once as a Brigade Commander with the 1st Cavalry Division; one tour to Bosnia in Operation Joint Guard and Macedonia as part of Operation Joint Endeavor, and one tour to Saudi Arabia for Operation Desert Shield/Storm.

He holds a Master’s degree from Central Michigan University in Business Administration, and completed a Senior Service College Fellowship at the University of Texas, Austin.

His decorations include the Distinguished Service Medal (1 OLC), Legion of Merit (2 OLC), the Bronze Star Medal (silver OLC and 1 bronze OLC), the Defense Meritorious Service Medal, the Meritorious Service Medal (silver OLC), the Air Medal for Valor, the Air Medal (w/numeral 4), the Joint Service Commendation Medal (w/ 1 bronze OLC), the Army Commendation Medals (w/1 bronze OLC), and the Army Achievement Medal. He has been awarded the Air Assault and Airborne Badges. He is a Master Aviator with over 2,500 flight hours, qualified on the UH-1H, OH-58A/C, AH- 1, AH-64A, and the AH-64D Longbow Apache.

Armor & Mobility had the pleasure of speaking with LTG Doug Gabram, U.S. Army IMCOM, regarding the unique challenges that recent months have presented in ensuring safe, functional installation operation and control amidst an expanding global pandemic.

A&M: You took command of IMCOM on 22 January 2020; what did you think your role as IMCOM’s Commanding General would be and how has that evolved over time?

LTG Gabram: I’ve lived, worked and trained on Army installations most of my life, but I never gave much thought to what it takes to run them or keep them secure. I knew the work would be hard and I would be on a steep learning curve! There is much to learn about the complex and difficult work that goes into keeping the lights on, the grounds and facilities maintained, the guard force equipped and ready, or any of the thousands of other things our IMCOM professionals do to build Soldier, Family and Civilian readiness, strengthen installation readiness, and continually improve our ability to project power around the world. Of course, now I give these things a lot of thought, and I learn every day. As I do, I am continually impressed with the important work IMCOM does for people and the value we add to the Army as a whole.

I also didn’t expect it would require me to lead another combat operation. And, make no mistake, we are in a real fight against COVID-19, and losing is not an option.

We are the United States Army and we’re going to win the fights we take on, and our battle against this virus is no different. However, the battlefield geography and combat conditions are very different from what we are used to. For the first time in a long time, we are in a home game. Our installations are our Forward Operating Bases, and our families are right there battling alongside us.

I know the 75 Garrison Commanders and Command Sergeants Major who lead our teams of professionals never expected their IMCOM tours to be in a combat environment either, but they are. The enemy’s Center of Gravity (COG) is its ability to move from one host to another. To get at that, we established early on the 3 Ps to live by: Protect yourself, so we can Protect the force, so the force can Protect the nation. The friendly COG is the talent, initiative and steady leadership of our Garrison Commanders. Their sharing of lessons learned and best practices has benefitted Soldiers, Civilians and Families in ways that kept our people safe, and our Army ready. In the spring we remained focused on the enemy, but over the last several months have opened our site picture to (re)establish mission command for other important Army priorities like housing, PCS moves, child care, spouse employment, and the Facility Investment Plan.

A&M: With challenges brought about since the advent of COVID-19, what are some adaptations IMCOM has/continues to implement to win the fight CONUS and OCONUS?

LTG Gabram: We first made contact with the enemy at our FOB in Daegu, Korea, in February. This was the first outbreak outside of Wuhan, China. On day one the city identified its first case and a week later there were a thousand. The garrison command teams deftly applied leadership to innovate tactics, techniques and procedures (TTP) to trace down the contacts of those testing positive, and to sanitize critical facilities to keep them open. In this OCONUS environment with host nation restrictions and other operational constraints, we quickly identified The Exchange and Commissary as key terrain. I refer to them as our Alamo; we will protect them and they will not close.

Camp Humphreys, USAG Italy in Vicenza, and our garrisons in Germany were the next to make contact. The lessons learned and shared from Korea were improved and further shared across IMCOM, the Army and the DoD. I don’t know if we’ll ever fully appreciate the benefit to our nation realized from these Garrison and Senior Commanders’ decisive action and creativity in those early days.

One innovation I’m particularly proud of is the cooperation between garrison housing services offices, directorates of public works, and their RCI housing partners to develop creative solutions to fix maintenance issues in privatized housing while operating in a COVID environment. For example, these partners developed systems for residents to submit photos of required work and receive repair parts at their home to install themselves; often with the aid of a qualified technician on the other end of a video chat to guide the process. Not only does this build a family’s self-reliance, such innovations helped clear the vast majority of back-logged work orders which eases the transition for thousands of Soldiers and Families as they PCS.

Another innovation is virtual battlefield circulation. Modern technology makes is easier to execute mission command of a globally dispersed force, and we’ve leveraged it to remain connected and mutually supportive. Engaged, connected, and innovative leaders are a force multiplier in this fight.

A&M: What do you see as the major long-term effects from COVID at IMCOM?

LTG Gabram: Any good unit benefits from shared hardship, danger and sacrifice. Our garrison commanders and their teams of professionals are now battle-tested. The confidence we are gaining from going through this fight together is making us more connected, more resilient, and more collaborative. We must fight complacency with discipline. Discipline = DMH (Distance, Mask, Hygiene). This period of reduced or no income for some of our MWR services will require us to look hard at some re-shaping options to ensure a profitable future that still provides Soldiers and Families with the services they require at a quality level they deserve.

A&M: What are some examples of IMCOM ingenuity during the pandemic?

LTG Gabram: There have been many. In Daegu, Korea in February, our team quickly figured out how to build teams to conduct, document, and publicly share contact tracing information. Here at the headquarters, we built a SharePoint repository of best practices and lessons learned that garrison commanders made use of to prepare for the pandemic as it advanced toward their perimeter. Our garrison command teams brilliantly leveraged social media to conduct virtual town halls, sometimes daily, to keep their shut-in communities informed with factual information. I see this as something we sustain over the long haul.
COVID hit Italy after Korea, and the Army team alongside their host nation partners reacted quickly to build a playbook on how to respond which we quickly shared across the Army. This kept everyone and everything moving in the same direction.

Finally, because it’s a fight, we began to incorporate more and more battlefield tactics. For example, our commanders and their Child and Youth Services professionals developed secondary, or fallback battle positions so that if a child or teacher at one Child Development Center (CDC) became infected and needed to be closed, an empty, sterilized facility was waiting to open to sustain child care for our essential workers.

A&M: What are the implications for the SSA of all garrisons having experienced this pandemic?

LTG Gabram: The Strategic Support Area is where we build combat power, sustain operations from and project power into the support, close and deep areas the fight. Because of its important role, our enemies are sure to attack it. Our adversaries know and understand they can’t beat us in a straight-up fight, so they’ve have had their eyes on us in recent months to see how we’ve been able to protect our installations and our people while remaining ready and maintaining our ability to project power in the COVID-19 environment.

While I don’t think we’ll realize all the benefits of this experience for a while, I can already tell it has increased the integration of tenant units with one another and with their garrison team. We have increased the integration and level of communication with state and local governing bodies off the installation, and with our privatized housing partners. We all pulled together to defeat a common enemy, and our installation communities are now stronger because of shared experiences and a deeper appreciation for the roles each of us play in remaining ready. And, because we all play such important roles as individuals, it is important that we first Protect ourselves, so we can Protect the force, so the force can Protect the nation.