Facing the Signature Wounds of War 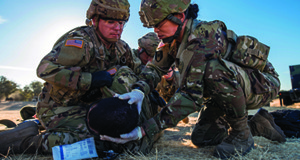 For the Walter Reed Army Institute of Research (WRAIR), Silver Spring, MD, it is the duty of Army medical practitioners and researchers to understand future conflict, forecast the medical threats that Soldiers will face, and develop medical countermeasures to meet them.

Historically, the most consequential threats to deployed Servicemembers are disease and non-battle injury—a trend that continued through combat operations in Iraq and Afghanistan where behavioral health and disease were leading causes of evacuation.
Since 1893, the Walter Reed Army Institute of Research (WRAIR) has been a leader in solving the most significant threats to Soldier readiness and lethality, including in combat casualty care. WRAIR has expeditionary laboratories on four continents that work in concert to afford Soldiers the best protection and support possible before, during, and after deployment. Our mission is to discover, design and develop solutions for military relevant infectious disease and brain health threats through innovative research protecting and optimizing warfighter lethality. Put simply, WRAIR exists to advance the science that protects our most prized weapon system on the battlefield—the U.S. Soldier.

Former Secretary of Defense and retired Marine General James Mattis once said, “the most important six inches on the battlefield is between your ears,” a reference to the critical role that your brain plays in decision making, learning, critical thinking and other critical battlefield skills. Indeed, as authorities and permissions normally reserved to higher leadership echelons are pushed downward through the chain of command to the battlefield, these cognitive abilities gain renewed importance in the multi-domain operations (MDO) environment.

According to the Defense and Veterans Brain Injury Center (DVBIC), approximately 83 percent of traumatic brain injury (TBI) cases are the result of concussion or mild TBI. Symptoms for mild TBI or concussion include confusion, diminished attention span, impaired decision making and anxiety—factors that can be debilitating to MDO. More severe symptoms can be intracerebral hemorrhage, skull fracture or epilepsy. In combat or austere environments in which transportation to definitive care may be prolonged, innovative technology to more accurately objectify the patient’s TBI status is a critical capability gap; determining whether or not a Soldier needs a CT scan to exclude intracranial hemorrhage or other ominous findings is a key necessity for combat casualty care.

Over the past decade, WRAIR and its partners worked to identify blood-based biomarkers for brain injury. The initial approach focused on GFAP (glial fibrillary acetic protein) a marker for neuroinflammation, and UCHL1 (ubiquitin carboxy-terminal hydrolase-L1) a marker for neuronal cell death—two biomarkers that were approved in 2018 to aid concussion diagnosis. WRAIR also established the Laboratory Assay for Traumatic Brain Injury Integrated Product Team in 2009 to establish a biomarker-guided strategic capability for the Military Health System to diagnose and triage brain-injured casualties on the battlefield.

WRAIR is continuing work to identify additional biomarkers to not only detect concussion, but also to detect bleeding deep in the brain and distinguish between TBI severity levels. The ultimate goal of a “lab-on-a-chip” that quickly and accurately integrates and automates tests on a small device easily utilized on the field. To date, there are no FDA-approved drug therapies to treat TBI. Working with partners from academia and industry to fill this gap, WRAIR helped establish the DoD-sponsored Operation Brain Trauma Therapy (OBTT) Consortium to screen the most promising TBI drugs across multiple pre-clinical TBI models to accelerate clinical translatability while reducing risk. OBTT was the first to incorporate blood-based biomarkers into its pre-clinical studies, showing correlations in over 1200 subjects between TBI biomarkers and different types and severities of brain injury. This evidence provided further validation to support the recent FDA approval of TBI blood-based biomarkers for diagnosing concussion.

Even more importantly, OBTT has shown that TBI biomarkers correlate with improved outcomes and reduced brain injury, indicating these biomarkers may be useful in validating the therapeutic efficacy of TBI drugs undergoing clinical testing. The OBTT provides an outstanding example of how leveraging partnerships can accelerate the velocity of relevance to identify a drug that will help Soldiers exposed to TBI in training or on the battlefield.

Most recently, WRAIR has leaned into developing innovative drug delivery solutions that can be readily employed at the point‐of‐injury, to mitigate morbidity and mortality in a prolonged field care environment, following TBI. These solutions include intranasal, intratympanic, and transdermal drug delivery (for concussion), a nanoparticle-mediated precision drug delivery systems, and a hydrogel‐based drug delivery platform designed to seal the wounded environment and to facilitate the controlled, continuous release of potent hemostatic agents to stop the bleed, antimicrobials to prevent infection and anti-inflammatory drugs to mitigate brain swelling and brain herniation.

The vast majority of TBIs occur in conjunction with extremity trauma, increasing the complexity of brain injuries that require tailored medical solutions. The primary focus of current work to address this concern is to experimentally replicate these complex brain injuries to assess various medical solutions to polytraumatic injuries, including testing pre-hospital resuscitation strategies and prophylactic administration of heparinoids for mitigating deep vein thrombosis in trauma patients, both of which target the standards of care and clinical practice guidelines for trauma patients.

Staying Ahead of Infection

Without air superiority or quick access to surgical care, wound infections are only poised to worsen as a threat during multi-domain operations. The threat of bacterial wound infections has already proven to be a major problem in Iraq and Afghanistan, where approximately half of casualties had bacteria in their wounds upon arrival to a hospital and approximately a third went on to develop infections. In the future of MDO, combat casualties will have to remain in unsterilized, field environments for longer periods of time. As current antibiotics continue to lose efficacy due to antimicrobial resistance, new, fieldable chemoprophylaxis and treatments are needed to extend the golden hour.

Building on data from its Multidrug-resistant organism Repository and Surveillance Network (MRSN), a resource that collects and characterizes bacterial isolates from laboratories and Military Health System sites around the world, WRAIR researchers are advancing several lines of effort to support the far-forward Soldier. Under the auspices of the Combatting Antibiotic Resistant Bacteria (CARB) presidential initiative, drug-developers are utilizing WRAIR’s library of over 80,000 compounds and the Army’s only x-ray diffractometer to advance new drug candidates. Furthermore, WRAIR is leading the way on developing bacteriophage therapeutics as an alternative solution to ineffective antibiotics. Bacteriophages are viruses that only infect specific bacteria and could be a novel way of addressing the spread of antibiotic-resistant infections.

Wound infections combined with TBI and other injuries can result in significantly more complicated injuries. WRAIR is hard at work to fully understand the relationship between multiple injuries, such as wound infections after blast-induced neurotrauma, in order to understand how treatment modalities and the body’s physiological response influence treatments. These data are critical to informing both clinical practice guidelines and novel countermeasure development.

The American military is shifting its focus from counter-insurgency operations to near-peer competition. Just as the operational warfighter, logisticians, and others need to understand what that change means for them, so too will military medical researchers. WRAIR is evolving as well to meet the needs of the Army of 2028 and beyond to allow our Army to compete, penetrate, dis-integrate, exploit and re-compete any adversary, anytime and anywhere. These efforts to keep Soldiers ready and resilient, to prevent and overcome wound infection and address traumatic brain injury are just the beginning of our efforts to protect and enhance the nation’s top weapons system before, during and after deployment.