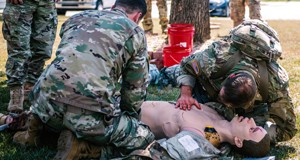 Prior to the creation of the Medical training concept use by MSTC, combat medics were trained to civilian standards of care. An evolution in tactical combat casualty care (TCCC) has brought about a standardization of instruction tailored to the combat environment.

While Military Treatment Facility, or MTF, reform tops military medical headlines, a renaissance is underway for Army medicine. MHS reform has presented a significant and strategic opportunity for the Army Medical Department to get back to its roots; To Conserve the Fighting Strength. After all, supporting the Warfighter is the fundamental purpose for the Army Medical Department’s existence. This renaissance to put the “Army” back into Army Medicine will require a cultural and paradigm shift in mindset, strategy, and the metrics we use to define success. Acknowledging that as the Army and Joint Force modernizes and resources remain at a premium, every capability, force modernization and training decision must be made with the Warfighter in mind. We must ask ourselves, “how does this support the Warfighter and how does this make the Army more capable to fight and win in Multi Domain Operations.” We must also re-examine what support to the Warfighter truly means in the next fight, our supporting strategy and what metrics we are using to define success.

Increasing lethality is a top Army priority, and for good reason. It is no secret that Multi Domain Operations, or MDO, against peer or near-peer adversaries will require a more mobile and lethal force enabled by agile, adaptive, fit and durable leaders and Soldiers. Large scale combat operations within future operating environments will challenge every facet of our current AHS capabilities, which had been forged through more than 18 years of war. The relatively unconstrained freedom of maneuver exhibited during this period in both the Afghanistan and Iraq theaters set the conditions for the highest survival rates in history.

In 2009, Secretary of Defense Robert Gates implemented a “golden hour” policy which mandated that urgent casualties were evacuated to an MTF within one hour from notification. In essence, the joint force did not adapt to its environment, the force adapted the environment to a U.S. standard of care. In most cases, a combat casualty had a higher chance of survival if injured in Iraq or Afghanistan than if injured in any city within the United States. It is widely anticipated that in a future MDO with a near peer adversary, the Army will not experience the same freedom of maneuver and will require a drastically different approach to provide Army Health System capability.

So how do we support lethality, the warfighter and develop capability to support MDO? It starts with a mindset focused on knowing our role. Plain and simple – we enable lethality through our capability and capacity to keep more guns pointed at the enemy, for longer periods of time. We enable lethality by preserving combat power and conserving the fighting strength!

The changing face of how the Army will operate in the future will require supporting and value-added capabilities that enable lethality. One such capability that is on the precipice of change here at the Health Readiness Center of Excellence, or HRCoE, is the 68W Combat Medic. Where the rubber meets the road across the Army, you will find these combat medics, affectionately known to the warfighter they support as “Doc.”
Doc will play a critical role for Commanders in the future fight. Doc will be relied upon to not only care for and evacuate the sick and wounded, but to also preserve combat power and articulate risk to mission and force regarding capabilities and finite resources. Doc must first be a master of the basics, especially adept at providing Tactical Combat Casualty Care to save life; force health protection to prevent disease; and focused primary care to preserve combat power by returning to duty those that are able.

Doc must also be tactically sound; grounded in a solid understanding of doctrine, tactically proficient and engaged in all aspects of the tactical plan. Doc must additionally be trained and proficient in providing care in mass casualty situations and in situations when evacuation is not tactically feasible within doctrinal timelines. Doc is required to be a trainer of Soldiers, Combat Lifesavers, and other Medics.

In order to provide these critical capabilities in a cohesive Casualty Response System, Doc must be supported and enabled by unit leadership. In 1998, 75th Ranger Regiment’s Commander COL Stanley McChrystal made medical training as one of their “Big Four” priorities. This directive enabled the Rangers to implement Tactical Combat Casualty Care, or TCCC into all facets of unit training. According to Kotwal and others in Eliminating Preventable Death on the Battlefield (2011), this command emphasis directly contributed to a 3% potentially survivable death rate versus 24% for the Department of Defense from 2001 to 2010. It is time for the rest of the Army to follow suit.

In my current role as the Noncommissioned Officer in Charge of Prehospital Medicine at the HRCoE, I am asked, “What do we need to change with the 68W to meet future MDO needs? Can’t we just make them all Paramedics?”

While the 68W will need a greater breadth and depth of knowledge and skills, the reality is that the Army doesn’t need to buy a fully loaded sedan, or Paramedic to use an analogy. While the fully loaded sedan is fully capable for most jobs in the city, it’s still a car with inherent limitations. A car is not designed for off-road excursions and if I need to move some furniture, I’m calling my buddy to help with a truck. Moreover, while heated leather seats and keyless entry are nice features to have, do they really contribute to the performance or capability for the added cost?

I like to say that what the Army really needs in a combat medic is a practical 4WD work truck with the frame and suspension to handle the challenging and unknown terrain ahead; a more adaptive 68W combat medic. A “work truck” can handle jobs off-road and around town and is easier to modify when needed for tougher jobs. You can “beef up” the suspension, throw bigger tires on it, and even tow a camper for those longer road trips.

Furthermore, a work truck gets used daily because it’s functional, capable, and versatile. To make this analogy work for our combat medics, commanders will need to learn how to drive, or employ them both in garrison and during deployments. Commanders must enforce preventive maintenance to maintain their medic’s skills and keep them “fueled up” with challenging and realistic training to ensure they are always ready.

What we choose to measure when judging the quality of combat medical care has a profound effect on where we place emphasis for performance improvement. Potentially preventable death on the battlefield has become the single most important metric in battlefield medicine that guides performance improvement. Yet by not establishing a prehospital performance improvement system, Army medicine has chosen to only focus on potentially preventable deaths within MTFs. If we can agree that our purpose in the Army Medical Department is to support the warfighter and our role in increasing lethality is to preserve combat power, we must enforce prehospital accountability and also redefine our metrics of success to include prehospital return to duty rates and missions enabled.