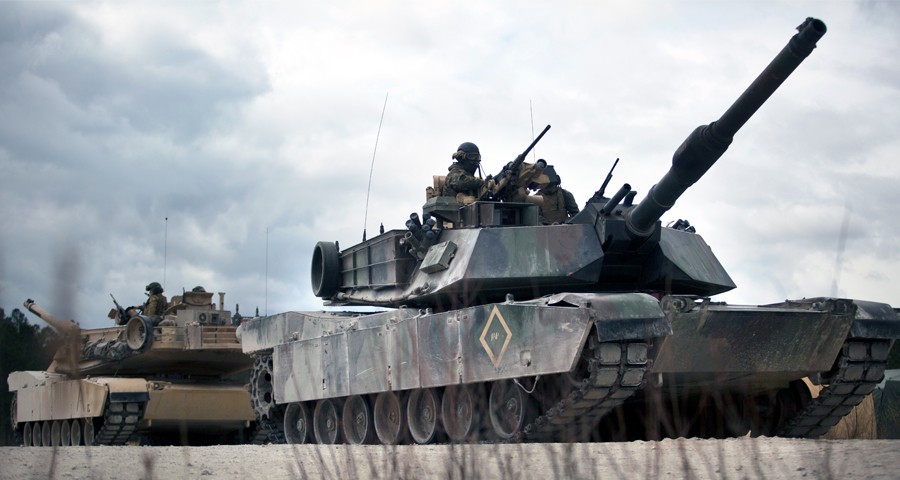 By MCSC Office of Public Affairs and Communication

Marine Corps Systems Command (MCSC) is the acquisition command of the Marine Corps, serving as head of contracting authority and exercising technical authority for all Marine Corps ground weapon and information technology programs. With headquarters located on historic Hospital Point, Marine Corps Base Quantico, Virginia, the campus is home of the Marine Corps acquisition professionals. The team is made up of Marines, sailors, civilians and contractor support personnel united by a common purpose: to equip and sustain Marine forces with the most capable and cost-effective systems for current and future expeditionary and crisis-response operations.

MCSC traces its beginning to the Marine Corps Research, Development and Acquisition Command (MCRDAC), which the Marine Corps established Nov. 18, 1987. Then-Commandant of the Marine Corps Gen. Alfred Gray established MCRDAC to streamline the systems acquisition process, incorporate the operating forces in identifying deficiencies, and establish clear lines of authority, responsibility and accountability. From its inception as MCRDAC through the transition to MCSC, the command has remained timely and consistent in providing quality systems and equipment to the operating forces. The technological advantage MCSC provides helps Marines shoot, move and communicate with the winning edge to continue the proud tradition of the Corps, unbeaten in battle in every clime and place. MCSC focuses on the individual Marine and the fighting formations of the Corps—the Marine Air-Ground Task Force or MAGTF.

On Jan. 1, 1992, the Marine Corps designated MCRDAC as Marine Corps Systems Command through Marine Corps Order 5000. The new command streamlined acquisition and life cycle management processes to improve the readiness of the Fleet Marine Force, increase responsiveness and support for the FMF, and reduce costs. The commander of MCSC reports to the commandant for in-service and operating forces support, and the execution of logistics sustainment. For research, development and acquisition matters, the commander reports directly to the Assistant Secretary of the Navy for Research, Development and Acquisition.

MCSC depends on the expertise of acquisition partners throughout the Corps and the other military services, working closely with the Army’s Program Executive Officer Combat Support and Combat Service Support and Program Executive Office Soldier; the Navy’s PEO Enterprise Information Systems; and the Marine Corps’ PEO Land Systems, which is co-located with MCSC at Quantico. The command recently realigned its organizational structure to equip the Marine Air Ground Task Force with the tools needed to adapt and overcome in any clime and place.

Marine Corps Commandant Gen. Robert B. Neller’s 2016 Fragmentary Order #1, “Advance to Contact,” ordered a comprehensive review of the Corps’ force structure and organization no later than the end of fiscal year 2017. Giving Combat Development and Integration the office of primary responsibility with Manpower and Reserve Affairs in support, he said, “We will be willing to accept risk in the size and organization of our units in order to create the capabilities we need for the future.”

“We looked at our nine program offices, supporting staff elements, and subordinate command Marine Corps Tactical Systems Support Activity to determine if the command was optimally aligned around the nature of the products it provides to the MAGTF,” Shrader said. “Equipping the MAGTF is what makes Marine Corps acquisition unique,” he said. “It’s what makes us relevant.”

Everything MCSC does supports the MAGTF: command and control; force protection; maneuver; fires; logistics and intelligence. The command’s mission is to develop capabilities, provide equipment and integrate them throughout and beyond the MAGTF.

On June 1, 2017, MCSC reached initial operational capability—a sea change in the command’s organization that is intended to enhance MAGTF alignment across product lines. This change resulted in a shift from its former structure of nine program offices, with 32 product managers and 87 teams. The new MAGTF-aligned structure features four portfolios that are aligned across the MAGTF elements—with the exception of the Air Combat Element. This new structure has 14 program managers, including two direct-report program managers.

Complete integration of the new structure is planned for Oct. 1, 2017. It will include refining and defining command relationships; aligning operations and customer interfaces with existing processes for prioritizing, resourcing and assessing work; and documenting and comprehensively supporting the organizational design.

MCSC’s acquisition programs range from weapons, tanks and infantry combat equipment, to ammunition, intelligence, and communications and medical equipment. These systems and more are managed by professionals aboard MCB Quantico and other locations in Northern Virginia. MCSC personnel are also located in Warren, Michigan; Camp Pendleton, California; Orlando, Florida; and Albany, Georgia.

In Orlando, the program manager for Training Systems provides training support, and develops and sustains training systems and devices to ensure Marines are ready for anything they may face while deployed. Meanwhile, MCSC’s Albany workforce manages the majority of funds set aside for sustainment, guiding newly acquired Marine Corps systems and equipment from cradle to grave.

“The future of Marine Corps ground weapons and information technology systems will continue to involve identifying and defeating complex and increasingly sophisticated threats,” said Shrader. “MCSC is prepping the battlefield with an eye on the future. Through our realignment, I am confident we will be better positioned to field the most advanced, affordable and relevant technologies; and increase the speed at which we deliver those capabilities to the MAGTF.” 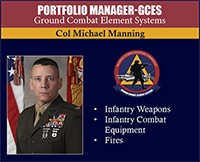 equips and sustains the Marine Corps with fully integrated infantry, reconnaissance, armor and fire support weapons systems to increase the lethality of the Ground Combat Element. In partnership with stakeholders, GCES executes the in-service support of fielded equipment to ensure readiness. Within PfM GCES are three program management offices:

Infantry Weapons
Infantry Weapons equips and sustains the Marine Corps with fully-integrated infantry weapons, optics, and non-lethal systems in order to facilitate the closing with and destruction of our adversaries by the Ground Combat Element.

Fires
Fires equips the MAGTF with direct- and indirect-fire weapons systems including the High Mobility Artillery Rocket System, Expeditionary Fire Support System, M1A1 Tank, and man-portable missile systems needed to dominate in battle. Fires also equips Forward Observers and Artillery units with the targeting systems, artillery survey equipment, fire control, radars, and acoustic sensors that give Marines a critical advantage in the detection of enemy forces and application of Fires on the battlefield. 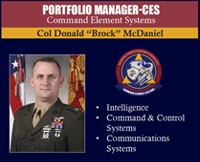 provides and sustains command, control, communications and intelligence capabilities to the MAGTF. Within PfM CES are three program management offices:

Command & Control
Focused on ensuring commanders’ access to the information they need to make decisions on and off the battlefield, C2 Systems provides the MAGTF with command and control systems; integration, interoperability and situational awareness; and a portfolio of counter-improvised explosive device and Force Protection systems. 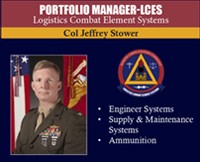 equips and sustains Marine Forces with supply, maintenance, ammunition and engineering systems in order to enable success in current and future operations. Within PfM LCES, there are three program management offices: 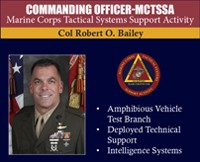 Program Manager Amphibious Vehicle Test Branch (PM-AVTB) The (PM-AVTB) is the only Marine Corps test center specializing in the test, evaluation and development of present and future amphibious vehicle platforms. The (PM-AVTB) plans, executes, analyzes, and reports on developmental and integrated test and evaluation events that characterize the performance of amphibious and ground combat vehicle systems. 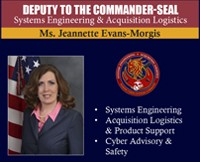 was appointed to the Senior Executive Service in December 2015 and is the Deputy to the Commander for Systems Engineering and Acquisition Logistics at Marine Corps Systems Command. In this position, she serves as the senior functional technical authority for all USMC ground and information technology systems. With a vision of designing for supportability in a cyber-rich environment, she directs and controls enterprise-level systems engineering across command product lines and product lifecycles to ensure MCSC provides end-to-end integrated, interoperable and certified warfighting capabilities.

was appointed to the Senior Executive Service as the Deputy to the Commander for Resource Management, Marine Corps Systems Command, on July 24, 2016. As Deputy to the Commander for Resource Management (DCRM), Ms. Reese directs and controls the full range of Comptroller responsibilities associated with the planning, programming, budgeting (formulation and execution) and accounting for all Procurement-Marine Corps (PMC) and acquisition Research and Development (R&D) as well as Operation and Maintenance funds required for the day-to-day operations of Marine Corps Systems Command, the Marine Corps Tactical Systems Support Activity, and affiliated Program Executive Officers.