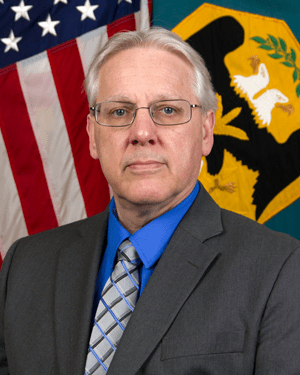 Mr. Benton is a 38-year employee with the Department of the Army, working for most of the past three decades in the chemical weapons assessment, destruction and decontamination field. His areas of expertise include air filtration technology, thermal decontamination and operational planning for chemical demilitarization. His accomplishments during his career include completion of two large projects. First was the destruction of the Newport Former Production Facility at Newport Chemical Depot, Indiana.

For both projects, Mr. Benton arranged for the decontaminated containers to be recycled rather than going to landfills, vastly reducing the waste generated by the missions. By recycling a total of 400 tons of steel for the Newport project and more than 3,200 tons of steel for the Pine Bluff mission, Mr. Benton supported the Army’s commitment to environmental stewardship.

Mr. Benton: As of April 2020, I have been the director for the U.S. Army Chemical Materials Activity (CMA) Recovered Chemical Materiel Directorate (RCMD) and am responsible for the programmatic oversight of the development and use of technology to support RCMD’s mission to assess and destroy recovered chemical warfare materiel in a safe, environmentally sound and cost-effective manner.

I previously served the mission as the former deputy, chief of operations and project manager at RCMD. While my title is relatively new, my experience in supporting the U.S. Army and reputation for thinking through every detail is not. I became a chemical engineer 40 years ago because I like to solve problems. Now I get to solve them at a higher level.

CST/CBRNE: Provide some brief background into RCMD’s evolution in support of the Chemical Materials Activity.

CMA RCMD is tasked with the fourth pillar, providing centralized management and direction to the Department of Defense for the assessment and destruction of potentially harmful RCWM. The directorate also completed the destruction of former chemical weapons production facilities in December 2006, four months ahead of treaty schedule.
Chemical warfare materiel is most commonly recovered during range-clearing operations and environmental remediation efforts on active military installations and formerly used defense sites where manufacture, testing and disposal of chemical materiel took place. Recovery sites may also include land turned over to other government agencies and land transferred to private ownership.

In support of the CWC, which provides international oversight of RCWM destruction, RCMD maintains destruction technology and personnel expertise to destroy RCWM around the country.

“As the Executive Agent for the RCWM Program, I commend the conditions RCMD creates to enhance Army Mission effectiveness and resilience,” said Honorable Alex A. Beehler, Assistant Secretary of the Army (Installations, Energy and Environment). “With more than two decades of efficient and forward thinking approach to the assessment and destruction of recovered chemical warfare in both accidental and planned environmental remediation scenarios, RCMD keeps our Warfighter ready, our communities safe and upholds the Army’s resolute commitment to environmental stewardship.”

The Hon. Beehler serves as the primary advisor to the Secretary of the Army and Chief of Staff of the Army for all matters related to Army installation policy and oversight of sustainability and environmental initiatives, including roles and responsibilities associated with the RCWM Program. The Program’s mission is to achieve, through application of rigorous project management principles and efficient use of RCWM Program resources, a comprehensive, coordinated, effective, and protective enterprise-based approach to conduct response actions at sites within the United States.

CST/CBRNE: Take us through a typical recovery operation from Response to Site Closure.

Mr. Benton: It may seem fairly straightforward that an item is recovered, assessed and then, if found to contain chemical agent, it is destroyed. But in fact, recovery of an item of chemical and/or explosive concern sets into motion a plan, approvals, permitting and inclusion at the international, federal, state and local levels that can take a year to fully execute, beginning with the assessment.

Assessment
When an item of unknown chemical fill is recovered, responding personnel first overpack the item and transport it to the nearest military installation for safe storage pending assessment and destruction.
RCMD deploys nonintrusive assessment equipment to rapidly provide detailed information about the item’s contents and distribute that information to appropriate authorities, reducing risk to the public, military and emergency personnel. These technologies include:

Analysis
In January 1995, the U.S. Army established the Materiel Assessment Review Board, or MARB, to make decisions regarding recovered items with unknown fills. Many munitions and containers recovered from old burial sites lack historical records and identifying marks due to age and condition. This makes identification difficult and requires the use of non-intrusive methods to identify the item, its fill and explosive configuration.
Within a few days of receiving the assessment data, the MARB, comprised of subject matter experts in chemical warfare from various Army organizations, convenes to review the data. The MARB makes the definitive identification of the item’s contents and its recommended disposition for the Department of Defense.

Destruction
The transportable Explosive Destruction System (EDS) is the Army’s premier technology to provide on-site treatment of chemical warfare materiel. The EDS uses cutting charges to explosively access chemical munitions, eliminating their explosive capacity before neutralizing the chemical agent. The system’s main component, a sealed, stainless-steel vessel, contains all the blast, vapor and fragments from the process. Due to successful initial operations, the EDS mission was broadened to include more chemical agents, multiple munitions per operation and larger munition calibers.

The success of the first EDS, known as EDS Phase 1, led to the development of a family of EDS units with mission-specific capabilities. The EDS Phase 2 was constructed to contain larger materiel in both size and explosive content. Both systems are trailer-mounted and transport easily where needed.

Site Closure
At the completion of any EDS mission, the operations site is closed according to plans approved by state and federal regulators. Secondary waste from the destruction operations is shipped to a permitted treatment, storage and disposal facility. The site is then closed in accordance with all local, state and federal regulations, permit requirements and international treaty standards.

CST/CBRNE: From assessment to site closure, how does RCMD support CMA’s dual commitment to efficiency and safety?

Mr. Benton: RCMD’s focus on mission safety and efficiency begins long before any chemical warfare materiel is recovered – at the research and development phase. Before RCMD brings new technologies online, rigorous research and testing confirms whether the systems can safely treat the chemical agents and munition sizes for which they are intended. This research also helps RCMD ensure all technologies earn approvals from the Chemical Agent Safety Council, of which RCMD is a member, the Army Technical Center for Explosives Safety, and the Department of Defense Explosives Safety Board.

A perfect example of this proactive approach to safety and efficiency involves RCMD’s ongoing operations at Pine Bluff Arsenal, Arkansas. In recent years during planned environmental remediation efforts at PBA, the U.S. Army Corps of Engineers recovered more than 7,000 mustard agent-filled CAIS K941 bottles. These bottles are most commonly recovered in small quantities and destroyed individually with the SCANS – a process that would take years given large number of bottles recovered. To safely destroy larger quantities of CAIS bottles more efficiently, RCMD developed a CAIS bottle holder for the EDS. The enhancement allowed for the neutralization of up to 178 K941 bottles in a single operation, reducing operations time from years to weeks and resulting in significant cost and waste savings.

CST/CBRNE: What goals or milestone achievements is RCMD currently working toward?

Mr. Benton: Based on USACE intrusive investigations and historical data, we anticipate the recovery of 1,000-lb bombs and other large items at Redstone Arsenal, Alabama, where environmental remediation activities are underway. With this in mind, RCMD is developing and testing an EDS Phase 3, which will have a much larger treatment vessel than the Phase 1 and Phase 2.

Whether it’s a large, planned environmental remediation effort, such as Redstone Arsenal, or the accidental recovery of a single legacy munition at a former testing range, RCMD remains vigilant. But most importantly – We are ready.