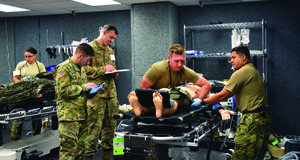 The U.S. Army’s newest medical communication device, the Medical Hands-free Unified Broadcast, or MEDHUB, is poised to enhance the fluidity of field trauma care, from point of injury assessment to accelerated evacuation.

It was two years ago, that Jay Wang, Product Manager for the U.S. Army Medical Materiel Development Activity (USAMMDA), was in Fort Rucker, Alabama. He was demonstrating the latest U.S. Department of Defense medical software called the Battlefield Airmen Trauma Distributed Observation Kit, or BATDOK, to the U.S. Army School of Aviation Medicine and Medical Evacuation Proponency Division, based on recommendations from the medics. Returning two years later, he co-facilitated the final medical study of the Medical Hands-free Unified Broadcast (MEDHUB) at the U.S. Army Aeromedical Research Laboratory (USAARL).

These past two years, Wang and his team of Medical Support Systems and Evacuation Project Management Office engineers have been hyper-focused on developing this product because of its important purpose: to help save the lives of injured Soldiers.

“In 2017, I was visiting paramedics in Fort Rucker. At the time, when they were transporting a patient to a hospital, they had to type all the patient’s medical information letter by letter into the old system,” said Wang. “They just didn’t have time for that.”

That’s when the idea for MEDHUB sparked. It was designed to improve the communication flow between patients, medics and receiving field hospitals. MEDHUB features smart automation technology, so medics can send patient information with the click of a button on a handheld tablet versus typing in thousands of characters. It shortens the medic’s time completing a Tactical Combat Casualty Care card and increases accuracy in completeness by about two-to-three times versus pen and paper.

After the data is captured, the device automatically forwards that message to the hospital through existing long-range tactical communication systems used by the DoD and prepares the hospital for the patients arriving.

“Every minute counts here,” said Wang. “There are certain things like defrosting blood that takes 20 minutes, so an early warning versus a five-minute-notice radio call makes a world of a difference.”

Putting Capability to the Test

To assure the best possible product, MEDHUB must be tested by Soldiers for effectiveness, and that is what took place at USAARL.

The purpose of the study was to find out how a field hospital staff reacts to using the device in a mass casualty environment. USAARL provided the facility for the study, lab equipment, technical support, Sim-man 3G manikins, which are life-size mannequins used in medical education, and Soldier support. A moulage team, a team with mock injuries for training purposes, makes test scenarios more realistic.

The test participants being studied were six members of the Forward Resuscitative Surgical Team with the 44th Medical Brigade from Fort Bragg, NC.

“USAARL was honored to host the 44th Medical Brigade, USAMMDA and the U.S. Army Institute for Surgical Research (USAISR). I’d like to first thank the study participants,” said Army Col. Jonathan Taylor, commander of USAARL. “These medical experts brought enthusiasm and realism to our test scenario that made it work. Next, the study team, led by Ms. Rachel Kinsler, created a realistic and relevant study design that allowed our medical experts and the test team from USAMMDA to effectively evaluate the technology.”

During the mass casualty simulations, randomized manikins were mocked-up to resemble combat injuries like burns, gunshot wounds and amputations. The 44th test participants were tasked with treating those victims and additional stress was added by giving the clinicians eight patients during the course of each scenario.

Evaluators, who were mostly research clinicians from the U.S. Army Medical Research and Materiel Command, captured every single medical procedure that the 44th test participants performed.

The 44th test participants treated patients in two circumstances. The first was based on standard of care where the doctors and nurses received a radio call from the medics five minutes before patient arrival. The second circumstance was with the use of MEDHUB, which provided patient information 20 minutes ahead of time in addition to the standard-of-care call.

The observers were watching to see how the extra minutes of preparation potentially helped the patient outcomes or provided better care.

“What I’ve witnessed is the test participants are getting to the patient quicker,” said Lt. Col. Chris VanFosson, Study Evaluator and Chief for Trauma Outcomes and Systems Research at the USAISR. “They are triaging. As evaluators, we have sat in the hallway for 20 minutes waiting for the triage officer to get to our patient. But with the MEDHUB system, it seems like they are getting there quicker.”

The 44th test participants needed to complete a few critical things in order for each patient treatment to count as criteria successes. They were not graded on how well they treated the patient, rather, if they completed the critical actions. For example, a critical action could be putting in a new airway or checking tourniquets.

“Evaluators denoted the time it took for procedures to be done, and we are logging all data points so we can see which procedures were done faster. Which were better organized so they were done earlier in the study? Was communication improved? Those are things that were looked at,” said Kinsler.

“We appreciate the opportunity for this training,” said Cpt. Sean McCoy, 541st Forward Surgical Team ER physician. “Our main goal is damage control resuscitation. We don’t have CAT scans, X-ray or ultrasound machines. We basically plug holes, give blood, start antibiotics and keep the patient warm. For some patients, the ‘Golden Hour’ is ultimately too long, these patients need to be treated within minutes.”

No Substitute for Real-World Application

Wang believes watching the Army clinicians in action allowed the research team to understand their gaps.

“As researchers, we can build new equipment for things that maybe we don’t understand or don’t work with as much,” said Wang. “We all have different roles, but a study like this expands our knowledge of how well we can all work together to provide a better Army.”

This hospital scenario test was MEDHUB’s final developmental test. The data from this study allows for the proper planning of an end-to-end Operational Test scheduled for March 2019. At that time, the use of MEDHUB will be tested from point of injury — to the ground medic — to the ground vehicle medic — to the air and ambulance — to the hospital.

After the data from this field hospital study is analyzed, USAMMDA and USAARL will take their findings and publish a joint paper and report. That data will serve to push MEDHUB along into the user’s hands, inspire user confidence in the device and continue to make MEDHUB better and stronger.