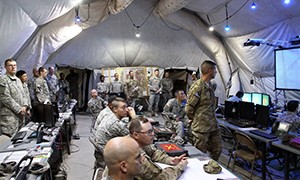 In recent years, the Army’s information technology modernization has been outpaced by rapid change in the commercial world. U.S. adversaries leverage commercial off-the-shelf technologies, which allow them to gain an advantage over Army mission command systems at a fraction of what it costs the Army to build them. As a result, the service branch recently undertook a robust study to optimize current requirements development, acquisition and business processes to capitalize on the private sector’s advancements in communications and networking.

The new network modernization strategy is designed to enable the Army to “fight tonight” while also actively seeking next-generation solutions to stay ahead of potential adversaries. Soldiers must be able to shoot, move and communicate effectively while the Army continually assesses and adjusts to operational needs and technological evolution. Immediately, the strategy focuses on: halting programs that do not address operational requirements; fixing the existing programs that are necessary to fulfill the most critical operational shortfalls; and pivoting to a new acquisition methodology. This pivot will develop the future state network by rapid technology insertion through concept evaluation, experimentation/integration and then requirement definition represents a fundamental change in the Army’s approach to tactical network modernization Army forces ahead of adversaries.

Through a collaborative effort across the requirements, materiel and operational communities, the service has identified four network modernization lines of effort to improve the network: creating a unified network; building a simplified mission command suite of applications; improving interoperability among Army elements, and with the Joint force and coalition partners; and improving command posts’ expeditionary mobility and capability (for full-spectrum operations).

The network modernization strategy will deliver capabilities in the near term to close gaps, and continue to emphasize maintaining superiority through longer-term efforts and continued optimization. Significant improvements can be remedied among high-priority units in the next 12 to 24 months through program delivery of interim capabilities that will: improve command post (CP) survivability and mobility; integrate tactical network transport; provide a mission command application suite that resolves incompatibilities between echelons; improve radio and network survivability against electronic warfare and cyber threats; and increase joint/coalition interoperability and access to joint fires and close air support.

“The key benefit provided by Secure Wi-Fi is the velocity that it brings to [the setup of] my mission command systems,” said Col. Michael Adams, commander of 1st Armored Brigade Combat Team, 3rd Infantry Division. “Near-peer adversaries are much more capable than enemies we trained against previously. In a decisive action training environment, [armed with Secure Wi-Fi], we are much faster and more mobile, and that equates to survivability.”

In May 2017, the Army’s G-3/5/7 (Operations, Plans and Training) issued an Army-wide directive for more than 400 tactical units to consolidate to a single software baseline for mission command applications. To execute the order, elements from PEO C3T mobilized to support fielding approximately 290 units in FY18 and the remainder of the Army next fiscal year.

The Army is also committed to resolving incompatibilities and unnecessary complexity in its existing mission command systems through the establishment of a Common Operating Environment (COE). The COE will replace current stovepiped mission command systems that perform individual functions but do not integrate easily and often fail to create a complete common operating picture.

“The rapid pace of deployments in the past 15 years has led to a significant increase in the Army’s mission command systems as units have requested additional capabilities,” said Col. Troy Crosby, project manager for Mission Command, who has the lead for implementation of the fielding efforts. “The Army is changing how it fields and sustains these systems, necessitating a move to a single baseline today, while we continue developing the next baseline as part of the Army’s Common Operating Environment effort.”

To collapse legacy warfighting systems, reduce the burden of compiling data and shrink the technical and physical footprint of the CP, the Army is developing the Command Post Computing Environment (CP CE), a core part of the COE. CP CE will feature a simplified user experience by combining warfighting functions into a common user interface, reducing Soldier training and accelerating the integration of new capabilities. Work on CP CE has progressed significantly over the last year. The, consisting of a new single tactical server infrastructure plus a common software baseline, will provide Soldiers an underlying core CP system upon which additional warfighting functionality can be built. The program is leveraging commercial software to support the baseline, which has saved time and money in the development process.

Core CP CE common infrastructure functions will provide chat, a standardized map, message centers and an extensible data model. These functions will serve as the foundation for every warfighting application and remain the same for every computer and every Soldier, regardless of branch or military occupational specialty. CP CE will undergo operational test in late 2018 and be ready for early fielding in 2019.

To support long-term network improvements, the program office is teamed with the Communications-Electronics, Research, Development and Engineering Center (CERDEC) to seek upgrades to Blue Force Tracking (BFT) 2, the Army’s key situational awareness network. In use since 2002, BFT provides friendly force tracking information and is integrated on more than 98,000 platforms across the Army and joint services. The next-generation BFT modernization effort, BFT 3, will employ several new and enhanced features including increased network capacity to transfer data, advanced resiliency to electronic warfare attacks and improved means of moving data from source to destination in different operating environments.

“This capability improvement is necessary as the United States faces increased cyber and electronic warfare threats from near-peer adversaries,” said Lt. Col. Shane Sims, product manager for Joint Battle Command-Platform, assigned to Project Manager Mission Command (PM MC). “The goal of the next-generation BFT 3 is to reduce the cognitive burden on Soldiers by creating a simple and intuitive network. The network has to be smart and fast enough to support these future missions.”

CERDEC is leveraging partnerships to establish cooperative research and development agreements (CRADAs) with industry and academia that will inform aspects of the BFT 3 upgrades. Information leveraged from these agreements will be shared with the Army Training and Doctrine Command, or TRADOC, to help scope BFT modernization requirements. Goals of the CRADAs include sharing lessons learned and insights into technology trends, providing a forum to review stakeholders’ concerns, and enabling a common understanding of the BFT’s future architecture, said Peter Bach, a CERDEC electrical engineer who is helping lead the effort.

“The Army is bringing in the best minds from industry and academia through CRADAs to support this upgrade,” Bach said. “The CRADAs will allow us to work collectively among our stakeholders to solve this problem from a modernization perspective. We’re aligning all efforts to ensure we have a strong industrial base.” Utilizing data from the partnerships, the program expects to release a request for proposal in early 2020, with anticipated incremental fielding of BFT 3 by 2025.

To seek material solutions allowing for greater command post mobility and survivability, the Army recently released a directed requirement to enable the material development community to begin seeking command post integration and capability solutions. The Army authorized the implementation of the Command Post Integrated Infrastructure, or CPI2, effort in December 2017 to address mobility issues and to ensure communications hardware and mission command application integration across platforms. PEO C3T program managers will lead material development phases with involvement from the Army Research, Development and Engineering Command; Army Test and Evaluation Command; and industry. The Army will invite industry to compete and participate in certain aspects of the integration effort via a process known as other transaction authority. “We’ll be synchronizing with our S&T and PEO partners to determine when solutions reach a mature technology readiness level,” said Kim Reid, product director for Strategic Mission Command, which reports to PM MC.

As part of the materiel development, integration and prototyping phase the Army has directed the program office to develop prototypes for five brigade sets of command post solutions. Each type of Brigade Combat Team (BCT) is represented in this effort. The First Unit Equipped date will be in Fiscal Year 2020 with the rest of the BCTs getting fielded in FY2021. “We will continue to identify future S&T efforts, and then based on the schedule, see where those transition points can be inserted into production. We’ll leverage the expertise of the Army’s scientists and engineers in these technical disciplines,” said Reid.

These and other efforts require significant institutional and cultural change in how the Army modernizes the network. Critical to the strategy is taking advantage of institutional reforms, made possible through authorities given to the Army in recent National Defense Authorization Acts, which will enable rapid prototyping, demonstration and experimentation with existing and emergent technologies. These efforts, coupled with predictable resources and real-time Soldier feedback, will allow the Army to keep pace with emerging threats, capitalize on private-sector advancements in communications and networking, and focus S&T efforts on anticipating and countering new threats. This strategy will enable the Army to prepare for war, “fight tonight,” and win against any foe.