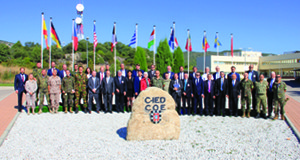 The Improvised Explosive Device is a tactical weapon with strategic influence which is why it has been the leading casualty producing weapon against civilians and friendly forces over the last twenty years. While less present in NATO’s collective consciousness since the end of the ISAF operation, IED’s continue to be used regularly by terrorist and violent extremist groups of all types. 14,700 IED incidents with over 23,400 casualties were reported worldwide between 1 August 2018 and 31 July 2019, with Afghanistan, Iraq, and Syria as particular “hot spots.” It is this continued use of the IED, the associated Threat Networks that support them, and most importantly the casualties that occur from their use that drives the work of the NATO Countering-Improvised Explosive Devices Centre of Excellence (C-IED COE).

After the 9/11 attacks, NATO recognized that the security environment changed significantly, therefore at the Prague Summit in 2002, the Heads of State and Government decided to establish a high level HQ, Allied Command Transformation in Norfolk, Virginia with its primary role to conduct transformation activities in order to help the Alliance adapt to newly emerging threats. They also decided to establish Centres of Excellence (COEs) to facilitate this adaptation process. A COE is a nationally or multi-nationally sponsored entity, which offers recognized expertise & experience to the benefit of the Alliance, especially in support of transformation. All COEs are established to focus on the areas of Education and Training, Analysis and Lessons Learned, Concept Development and Experimintation, and Doctrine Development and Standards.

The NATO Countering-Improvised Explosive Devices Centre of Excellence (C-IED COE), located in Madrid, Spain, is one of 25 NATO accredited Centres of Excellence. The NATO C-IED COE was established in 2010 along the pillars of NATO C-IED Doctrine of Defeat the Device, Prepare the Force, Attack the Network, and underpin through Understanding & Intelligence. The mission of the C-IED COE is to provide subject matter expertise in support of NATO, NATO partners, and the international community fight against the IED system, to increase the security of Allied Nations and troops deployed in theaters of operations by reducing or eliminating the threat of IEDs used, in particular but not limited to, by terrorists and insurgents. As the Department Head for C-IED Education and Training for NATO the C-IED COE accomplishes its mission through NATO accredited courses to teach NATO doctrine and standards; Research & Scientific Projects to facilitate the ever changing technologies and TTPs; Lessons Learned, Technology, and Interagency Workshops to facilitate the sharing of information; supporting NATO and Multinational Exercises to facilitate the training and understanding the operational impacts; supporting Defense Capability Building (DCB) to promote the development of C-IED within Non-NATO partners; and supporting the development of C-IED related doctrine within NATO. Currently there are 12 member nations at the C-IED COE; Spain, as the framework nation, Czech Republic, France, Germany, Greece, Hungary, the Netherlands, Portugal, Romania, Sweden, Turkey, and the United States. Furthermore, there is capacity for additional nations to join and provide their own expertise to the current pool of Subject Matter Experts (SMEs). The CIED COE is also unique in manning SMEs from multiple military services, national law enforcement agencies, and intelligence services.

Countering IEDs has occurred for decades. Before 9/11, IEDs were used in conflicts by criminals and terrorist groups operating around the world, but with more of the formal focus being within the law enforcement community, not the military. Two notable exceptions were the United Kingdom in Northern Ireland and Spain in their own Basque region. But it was the proliferation of IEDs by insurgent forces in Iraq and Afghanistan against the coalitions that brought the IED and therefore C-IED to the prominence it has today. The C-IED Task Forces that were built such as Combined Joint Task Force (CJTF) Troy in Iraq and CJTF Paladin in Afghanistan allowed Commanders to gain a better understanding of the enemy’s “IED system” while building the C-IED approach we know and use today. The structure and capabilities that were brought together under these CJTFs allowed the synchronization of multiple efforts to give senior commanders more and better options to execute operations to defeat our enemies.

When talking about C-IED the key term to remember is the enemy’s “IED system”, which NATO defines as the personnel, resources and activities necessary to resource, plan, execute and exploit an IED event. Within the C-IED Community of Interest, both in the United States and in NATO it is recognized that C-IED is not only a military function, but requires a comprehensive approach that crosses Joint, Inter-Agency, Multi-Domain and Multinational lines of effort in order to maximize the success of all measures to Defeat the Device, Prepare the Force, and Attack the Network. Some nations both inside and outside of NATO view C-IED as synonymous with Explosive Ordnance Disposal (EOD), or IED Defeat (IEDD); both of which fall under the bigger function of Military Engineering (MILENG) in NATO. This misses the comprehensive approach of C-IED. In both theory and practice, C-IED is a coordinating function that brings together the initial and very important work of EOD/IEDD under the pillar of Defeat the Device. But, it also includes the follow on work of technical exploitation that comes from all the material and evidence recovered from an IED event, and the follow on laboratory analysis both inside and outside of an area of operations. The information that is gained through this analysis is critical and can lead down several follow on paths. One can be research and development for the design of specific tools and equipment or better forms of protection for personnel. Another is actionable intelligence that when fused with operational planning can lead to kinetic or non-kinetic operations against targets that gets after Attacking the Network pillar which is the main effort of the C-IED approach in NATO.

Utilized by the United States and other nations, but not yet formally in the NATO Alliance, is the concept of Countering Threat Networks (CTN). This is where the comprehensive Interagency and Whole of Government approach comes into play because if you can go after the financial, and material resourcing aspects of IED networks you can potentially prevent the IED from being built and emplaced on the battlefield against our troops or civilians.

We know what the impact of IEDs has been in the recent past, and the effectiveness that C-IED has contributed to defeat the IED system, but what about the future? How will advancing technologies, such as 5G and 3D printing, affect the use of IEDs over the next 5, 10 or 15 years, both on the battlefield and in the homeland? How will IEDs potentially be used in a future conflict by a peer adversary, either in conjunction with other hybrid threats, or in support of a conventional military campaign? And therefore, what is the future of C-IED? Will it continue as a separate Function and Discipline within NATO? Will the necessary resourcing be allocated to ensure the manning, training, and equipping continues within our nations? How well do the pillars and tenants of C-IED support Multi-Domain operations? And probably most important, will our forces and our nations learn from the lessons of the recent past and current ongoing operations? These are just some of the questions that the NATO C-IED COE continues to seek answers to, and we do this by working with our nations and international partners as part of the Global C-IED Community of Interest.

DISCLAIMER: The information in this article represents the point of view of the NATO C-IED COE about the subject matter according to our knowledge and expertise, and does not reflect the official policy or position of NATO or national postures.