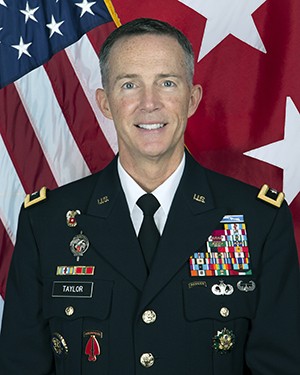 As the commanding general for a 16,000-person, two-star global command and the senior commander of a 28,000-person military base, General Taylor serves as the U.S. Army’s command, control, computers, communication, intelligence, surveillance, and reconnaissance (C4ISR) materiel integrator. He is responsible for enabling the U.S. Army’s warfighting readiness by providing sustainable global C4ISR support.

General Taylor enlisted in the U.S. Army at the age of 19, later graduated from the University of Maryland, attended Infantry Officer Basic Course in 1988 and was first assigned to the Berlin Brigade, West Berlin, Germany, as rifle platoon leader. He holds a Bachelor of Science degree in Technology and Management and holds Master’s degrees in Telecommunications Management, and National Security and Strategic Studies. He is a graduate of the U.S. Naval War College.

A&M: You have been in command at U.S. Army Communications-Electronics Command (CECOM) now for almost one year. Can you tell us what you have learned during that time?

MG Taylor: Before becoming the commanding general in April 2017, like most Soldiers I thought of CECOM as the ones who rebuilt communications gear after redeployment or provided technical support in the field. I underestimated the scope of CECOM’s vast responsibilities and capabilities. That is because CECOM’s work, when we are doing our job well, is primarily behind the scenes. And that’s a good thing.

The American Soldier, to fight and win, depends on CECOM to sustain expeditionary command, control, communications, computers, intelligence, surveillance, and reconnaissance (C4ISR) readiness. It is amazing how much our team of roughly 16,000 Soldiers and Civilians do to enable mission command across multiple domains. In fact, the most common statement I hear from Soldiers who visit is that they wish they’d known earlier everything that CECOM does.

A&M: Could you give us an overview of CECOM’s mission and structure?

MG Taylor: Simply put, we empower the Soldier with winning C4ISR capabilities. This means that our talented professionals are laser-focused on providing the Soldier with the best logistical support, from birth to grave, for virtually every piece of electronic equipment in the Army’s warfighting inventory. Our work ranges from protecting and updating Army’s software, to maintaining communications and electronics equipment, to conducting interoperability and certification testing with coalition partners, to upgrading the White House’s network infrastructure. CECOM is headquartered at Aberdeen Proving Ground (APG), MD, where I also serve as the senior installation commander.

At APG, our Software Engineering Center (SEC) is a major part of CECOM. Most Soldiers don’t think about software on a day-to-day basis, but SEC touches them daily. When they scan their badge to eat in the dining facility, when they order supplies, and when they use C4ISR systems in their command post, SEC provides and sustains the software for those systems. One of the most critical things SEC provides is force protection—writing and fielding the software that protects aircraft from enemy radar and missiles and our ground troops from remote-controlled IEDs, among other threats.

Also at APG, we have our Integrated Logistics Support Center (ILSC). Through rapid acquisition, maintenance, and fielding, the ILSC repairs C4ISR systems as far forward as possible to support combatant commands, including in Southwest Asia, the Korean peninsula, and Europe. Forward repairs reduce turnaround time, and in some cases repair-cycle time, decreasing the duration the Soldier is without equipment.

Another key part of CECOM is the Tobyhanna Army Depot (TYAD) in Pennsylvania, which maintains more than half of all communications and electronics equipment for the Department of Defense. TYAD provides full-spectrum logistics support to the Soldier, including fabrication, integration, and field support to C4ISR systems. With 51 forward depot-level locations worldwide, approximately 20 percent of our TYAD professionals are in the field actively supporting our units.

At Fort Hood in Texas, our Central Technical Support Facility (CTSF) team performs Army Interoperability Certification testing and configuration management for all operational through tactical-level C4I systems, applications, and hardware before release. Essentially, the CTSF ensures that all network components operate together as intended in the field.

MG Taylor: It may come as a surprise, but even with the cost of research, development, production, testing, and fielding, up to 70% of the life cycle time and cost for a piece of C4ISR equipment is in sustainment. That is mostly because the Army upgrades, modernizes, and continues to use capabilities long after they are fielded. When it comes to supporting Soldiers’ post-deployment reset of C4ISR capabilities under the Army’s Sustainable Readiness Model, which is the successor to the decade-old Army Force Generation model, CECOM now has to reset in less than half the time. Pushing software patches, updating hardware, keeping the supply part inventory rightsized, and removing obsolete equipment from unit inventories is a huge job. But it’s incredibly important for both battlefield readiness and fiscal responsibility.

A&M: Management of software, licensing, and intellectual property are a growing problem to the Army. We see that CECOM’s SEC will soon host the third Army Software Solarium at APG. How is this getting after the software management problem?

MG Taylor: You hit the nail on the head with the first part of that question. Literally every piece of combat equipment, business system, and the computer on everyone’s desk runs on software. Until our SEC took the lead, no single entity within the Army enterprise had responsibility for software management. We have the armor, fires, Soldier, and aviation centers of excellence, as well as the Program Executive Offices and Program Managers for hardware systems. But there’s no equivalent structure for software. And remember, all that hardware needs software to perform and operate on a network. This results in disparate software management that each branch of the Army does its own way. And that’s no way to run sustainment.

So the SEC, with the partnership of the Army Chief Information Officer, convened the first Software Solarium in 2016 to begin getting our heads around that conundrum. After taking that initial look, last year the vision was a little more defined, and we agreed on several lines of effort. This year, we will push further ahead on getting a coherent enterprise-wide software management philosophy into place.

One recent development to help this effort was the designation of SEC as the Army’s Center of Industrial Technical Excellence for software. This allows the SEC to enter into public-private partnerships, secure intellectual property rights, and greatly expand the knowledge base of its workforce. In turn, that enables us to more rapidly and accurately react to software challenges our units face in the field.

A&M: APG is known as the “Home of Innovation” for the Army community. What new or innovative programs or processes are paving the way for the future, specifically in C4ISR sustainment?

MG Taylor: There are several areas where CECOM is anticipating the needs of the Army and positioning support for the future force. I can start right where acquisition starts: in contracts. The truth is, until recently most acquisition contracts only spoke to delivery. In other words, produce and field a piece of equipment. But what happens after that? Well, the almost 70% I spoke of before—sustaining that equipment for the remainder of its useful life. That sustainment has been an afterthought, which is an extraordinarily inefficient and ineffective approach, and that just cannot continue.

So we have been working closely with ACC-APG to add game-changing sustainment language into acquisition contracts. This will allow us to better manage the resources needed for life cycle support. We can also better leverage our industrial partners to provide that support when needed by having them think about sustainment from inception, as well as work to secure data and intellectual property rights for commercial technologies that we use.

Another area of concentration for us has been supply availability. My boss, General Gus Perna, commander of Army Materiel Command, has charged us with providing 100% supply part readiness to units. That’s not the simplest thing to do when you have 187,000 Soldiers abroad supporting combatant commanders in 140 countries. But tied in with divesting obsolete equipment—getting old gear out of the inventory so we can concentrate on sustaining current stock—we have been making steady progress in this area as well.

MG Taylor: Absolutely. I often think of a quote from General Douglas MacArthur: “The history of failure in war can almost be summed up in two words: Too late.” We have a responsibility to make sure our Soldiers have everything they need to execute their mission effectively, wherever and whenever they may face an adversary. This responsibility belongs to all of us—every position on the CECOM team impacts our Soldiers and their readiness. This is what motivates us and is the key to our success. We cannot, and will not, be “too late.”