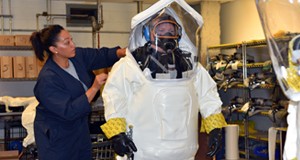 The Program Executive Office for Assembled Chemical Weapons Alternatives (PEO ACWA), U.S. Army Acquisition Support Center, is the only entity within DoD responsible for all aspects of destroying the remaining 3,100-ton stockpile of assembled chemical weapons by the congressional destruction deadline of December 31, 2023.

In 1996, Congress established the Assembled Chemical Weapons Assessment (ACWA) program to identify alternatives to incineration for the destruction of “assembled chemical weapons,” which refers to munitions containing chemical agent configured with fuzes, explosives and propellant as opposed to bulk chemical agent stored in steel shipping containers.

In this initial 1996 law, and again in follow-on legislation, Congress directed that ACWA program’s assessment be conducted independently of the Army’s chemical demilitarization effort, and further stipulated that the ACWA program manager report directly to the Under Secretary of Defense for Acquisition and Sustainment. Organizationally, the ACWA program is administratively attached to the U.S. Army Acquisition Support Center.

During the period 1997 through 2000, the ACWA program successfully demonstrated several community-approved alternative destruction technologies, leading the Department of Defense to select neutralization followed by biotreatment for destruction of the stockpile at Colorado’s U.S. Army Pueblo Chemical Depot, and neutralization followed by supercritical water oxidation for the Kentucky stockpile at the Blue Grass Army Depot. Concurrently, Congress assigned responsibility to the ACWA program for managing the implementation of the selected technologies at the Colorado and Kentucky sites. The program subsequently changed its name from Assembled Chemical Weapons Assessment to Assembled Chemical Weapons Alternatives program to reflect this expanded mission.

In 2002, the Army continued its chemical demilitarization mission under the auspices of the U.S. Army Chemical Materials Agency (CMA). The CMA maintained responsibility for the destruction of the chemical weapons stockpile at all U.S. storage sites except Colorado and Kentucky. In 2012, the CMA successfully completed destruction at seven sites, accounting for nearly 90 percent of the U.S. chemical weapons stockpile, leaving the remaining 10 percent to be destroyed by the ACWA program. Also in 2012, the ACWA Program Manager was designated the Program Executive Officer for ACWA.

The ACWA program’s destruction effort began in 2016 and continues today at Colorado’s Pueblo Chemical Agent-Destruction Pilot Plant, known as PCAPP. Employing neutralization followed by biotreatment as the primary destruction technology, the PCAPP is destroying hundreds of thousands of munitions containing more than 2,600 tons of mustard agent. Additionally, the Army’s Explosive Destruction System, or EDS, is augmenting the main plant by destroying those chemical munitions not easily processed by PCAPP’s automated equipment.

In Kentucky, the Blue Grass Chemical Agent-Destruction Pilot Plant (BGCAPP) is in the systemization phase, during which the plant’s many systems are tested, procedures documented, and workers trained. Because the Blue Grass stockpile contains both mustard-filled and nerve agent-filled projectiles, neutralization followed by supercritical water oxidation is the destruction technology to be employed at this facility. While the BGCAPP was still under construction, it was discovered that the mustard agent fill of the projectile stockpile had solidified to the point where automated processing was no longer practical. To resolve this problem, an explosive destruction technology known as a Static Detonation Chamber will be used to destroy the entire stockpile of mustard-filled projectiles, augmenting the BGCAPP. This large, electrically-heated device was specifically designed to destroy intact munitions without the need for their disassembly. Both BGCAPP and the Static Detonation Chamber are expected to start destruction operations in 2019 to eliminate the 523-ton Blue Grass stockpile.

“To increase the likelihood of achieving stockpile destruction earlier than the 2023 deadline, options to supplement the existing destruction facilities, such as the addition of static detonation chamber facilities at the Pueblo site are being considered,” said Mr. Michael Abaie, Program Executive Officer, Assembled Chemical Weapons Alternatives. “These options look to accelerate destruction while controlling cost growth and mitigating technical risks to stay on or ahead of schedule and maximize program efficiency.”

“Despite the many challenges posed by these obsolete but still deadly chemical weapons, the DoD is fully committed to destroying the remaining chemical weapons stockpile at the Colorado and Kentucky storage sites by the December 2023 destruction deadline in a safe, environmentally compliant and timely manner,” Abaie stressed. “The safety of the workforce and the community and protection of the environment remain paramount, as the United States closes the book on this entire family of weapons without ever using them in battle.”