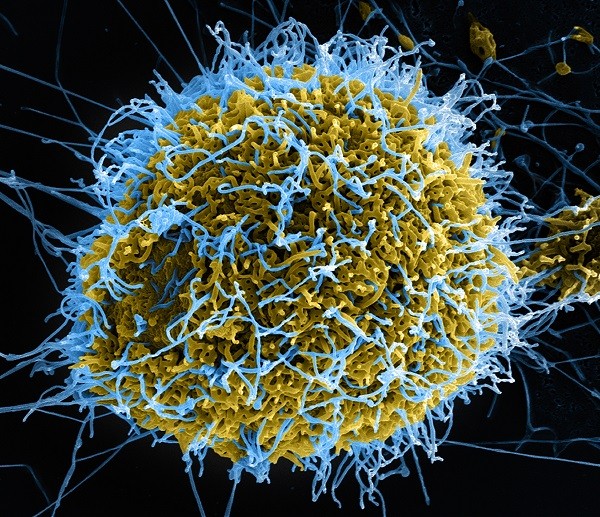 How existing and emerging technologies can help stop the spread of a worldwide epidemic.

The FDA’s Emergency Use Authorization (EUA) is limited to qualified laboratories designated by the CDC, but today ABI is just one of several companies to hold an EUA for Ebola detection. Laboratory-based technologies play an essential role at both civilian and military hospitals, but detecting the disease in the field and at the point of care (POC) are also critical. That’s why S&BP has researched Ebola detection products and interviewed companies that, pending FDA approval, will supply technologies that could affect the marketplace.

In October, BioFire Diagnostics (Murray, UT) received an FDA EUA for FilmArray BioThreat-E, the first commercial Ebola test to be authorized for emergency use on patients with signs and symptoms of infection with the Ebola Zaire virus. As the company explained in a press release, its FDA-cleared clinical molecular biology diagnostic device is already used in hundreds of hospital-based laboratories across the U.S. According to the Salt Lake Tribune, the Film Array was used at Emory Hospital in Atlanta, where four patients with Ebola have been treated. 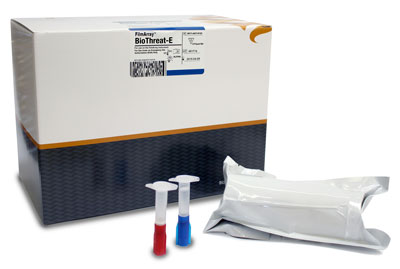 The BioFire Film Array system does not require pipetting—the use of a dropper—and generally provides results in 60 minutes. The Film Array machine, which was derived from technology developed at the University of Utah and patented in 2012, is about the size of a toaster. The EUA for the Ebola test does not constitute official FDA clearance or approval, but does enable hospitals that already own FilmArray equipment to make Ebola diagnoses. BioFire also received an FDA EUA for an Ebola test to be used in laboratories designated by the Department of Defense (DoD).

Outside of the lab, providing fast, accurate, and easy-to-obtain test results for the Ebola Zaire virus is a challenge that several diagnostic technology companies have undertaken. POC tests could provide an alternative to tabletop equipment such as the ABI 7500 or BioThreat-E. John Sperzel, CEO of Chembio Diagnostic Systems, called Ebola containment a “race against time.” In an interview with S&BP, Sperzel described the Ebola epidemic as a “humanitarian crisis”  that must be addressed urgently, emphasizing that “every day matters” in the development of POC testing.

Under current FDA EUAs, Ebola hemorrhagic fever can be diagnosed only in specialized laboratories. “This limitation,” Sperzel said, “significantly delays the identification and isolation of the patients who have Ebola and in turn makes it more difficult to control an outbreak.” Pending successful development and regulatory approvals, however, medical personnel will be able to use Chembio’s patented DPP technology platform for stand-alone POC Ebola testing. Chembio also plans to include an Ebola assay as part of its DPP Febrile Illness Assay, which can detect antigens from a variety of viruses, bacteria, and parasites. 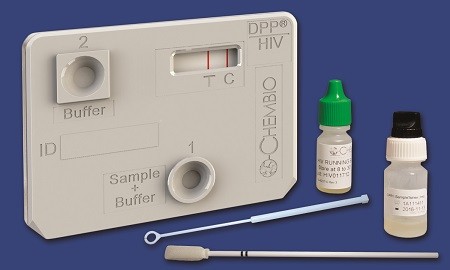 Developed in under eight months, the DPP Febrile Illness Assay is now in clinical trials in several countries, including areas of West Africa. As Sperzel told S&BP, Chembio partnered with a U.S. government agency to develop this 20-minute, multiplex POC test. “With a single, finger-stick drop of blood,” he says, the DPP Febrile Illness Assay can detect different antigens, and do so without “sophisticated instruments or refrigerated reagents.” Chembio has also partnered with Integrated BioTherapeutics of Gaithersburg, MD, a biotechnology company that has developed proprietary Ebola reagents.

“Chembio has a track record of developing point-of-care tests for infectious disease,” Sperzel said, adding that his company’s three FDA-approved, CLIA-waved POC HIV tests are “more than at any other firm.” Pending FDA approval, Chembio plans to produce its Ebola assay on existing DPP manufacturing equipment at the company’s Long Island, N.Y., facilities, which total more than 60,000 square feet and are registered with the FDA, licensed by the Department of Agriculture, and ISO certified.

On the West Coast, San Diego-based Genalyte has developed a standard 10-minute Ebola test that uses proprietary silicon chip technology and its existing Maverick Detection System platform. As Cary Gunn, Genalyte’s president, CEO, and co-founder told S&BP, the system is designed for “in-theater use at pop-up or mobile labs.” The technology can also be used at hospitals, airports, and other locations where electrical power is available. Gunn described the power requirements as “basic,” and the instrument is equipped with a power converter that can generate the correct voltage from a number of inputs. 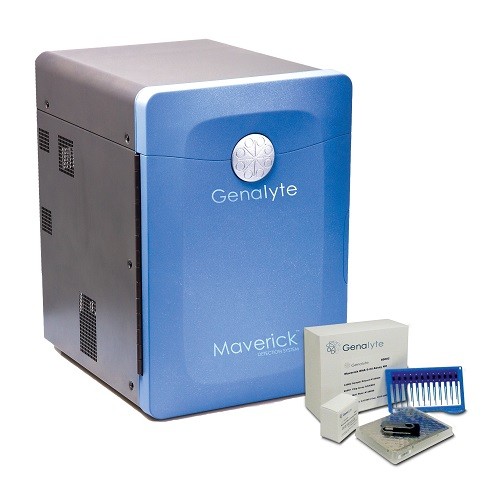 With the Maverick Detection System, Ebola testing occurs while blood is flowing over a silicon chip. “There’s no mixing, measuring, or adding of particles,” Gunn added. Whereas other immunoassay formats require fluorescent, luminescent, or radioactive labels, Genaltye’s Maverick Detection System measures wavelength resonance shifts to perform label-free detection of protein binding events. In other words, the silicon chip is coated with antibodies that bind to the proteins in the Ebola virus.

Each chip costs approximately $10 and can process two samples. Users can perform one Ebola test at a time, or load blood samples onto multiple silicon chips. This facilitates the “rapid screening of large groups of people,” Gunn said, such as airplane passengers or medical personnel. System features include a monitor, keyboard, and mouse. The Maverick Detection System also includes FDA Part 11 compliant software with traceability and data integrity.

Importantly, Genalyte’s detection device also provides multiplexed testing, a key feature in both Africa and, now, the U.S. By testing for “an entire portfolio of pathogens at once,” Gunn explained, medical personnel can avoid misdiagnoses. Otherwise, a patient in Africa may suffer from both Ebola and malaria, receive medical treatment only for malaria, and then return to a home village where the Ebola virus then spreads. The Maverick Detection System performs what Gunn called a “battery of tests,” including malaria, dengue fever, Lassa fever, and Ebola.

The Ebola virus isn’t new, but the global epidemic has led to new applications for existing detection technologies. Lyle L. Probst, president of PositiveID, once directed biodetection programs at Lawrence Livermore National Laboratory and managed a series of biodetection initiatives for the Department of Homeland Security (DHS). A principal developer of the BioWatch mobile laboratory, he also managed the Bioagent Autonomous Networked Detector (BAND) program for the DHS Science and Technology Directorate.

As Probst told S&BP, PositiveID’s Firefly Dx biodetection device is a handheld version of an 800-pound instrument that was developed as part of the BAND program and deployed in Boston, MA, both at the harbor and in the metro. The Firefly, however, neither incorporates air collection nor runs continuously on 30-day service cycles when the reagent is replaced. Although the portable detector’s footprint is much smaller, “the chemistry is identical,” said Probst. Moreover, the real-time PCR that the Firefly uses is the “industry’s gold standard” and what the CDC trusts for its own assays.

PositiveID’s “sample in, results out” device is designed for the “unskilled user,” Probst added. First, the tester inserts the sample into the cartridge. Next, the nucleic acid is exposed and purification occurs. In the chamber, the sample is mixed with the PCR reagents. “You get the same number of cycles and the same reaction volume as with laboratory equipment,” Probst said, “but you get results in a matter of minutes instead of hours.” Finally, the test taker can either read the results on an optional display, or transmit them via Bluetooth or wireless communications to an operations center. 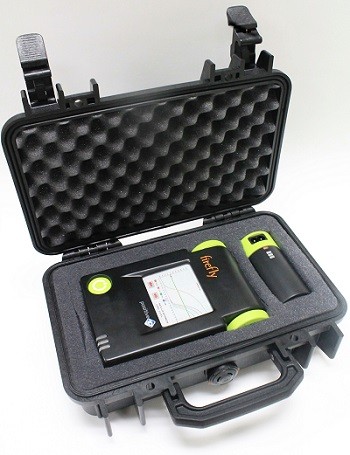 PositiveID’s Firefly technology is a handheld version
of an 800-pound instrument.
(PositiveID)

The Firefly is powered by a rechargeable battery that Probst compared to the powerplant for a cellphone. “Typically, users carry around a few batteries,” he added, and then replace them as necessary. The portable detector also has an adapter so that users can connect to a wall outlet when plug-in power is available. Although the Firefly is designed for field use, it’s not yet ruggedized for military applications. According to Probst, PositiveID plans to “military harden” the Firefly, conduct field trials next summer, and begin production by the end of 2015.

Like some industry analysts, Probst expresses skepticism towards claims by companies that boast of creating faster, cheaper Ebola detectors. “We have a track record,” he said of PositiveID, and “we don’t rush to market.” BioFire Defense, Chembio Diagnostic Systems, and Genalyte can also point to past successes that could help predict future results. In what may soon be a crowded marketplace, however, buyers will have to look beyond the headlines and make procurement decisions not just about the Ebola Zaire virus, but about the next epidemic that is sure to come.