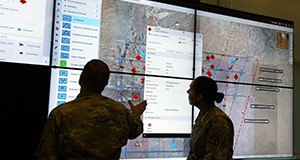 The opinions of rank-and-file Soldiers may often be unsought, but not so with the DevOps model of developing and fielding new technology. PEO C3T reveals how this approach has been successfully used in improving new technology by putting it in the hands of Soldiers early in the development process.

“The ear of the leader must ring with the voices of the people.” These words from Woodrow Wilson echo loudly across today’s Army. As the force faces potential peer adversaries, it searches for solutions to reduce traditionally long acquisition timelines and modernize its tactical network more rapidly. In support of this effort, program offices and cross-functional teams have embraced a Developmental Operations (DevOps) model, incorporating Soldier feedback from the early stages of the acquisition process and driving rapid improvements in critical mission command and tactical network systems.

The Army’s Network Modernization strategy focuses on four modernization priorities known as lines of effort (LOEs): creating a unified network transport layer, building a common operating environment for mission command applications, improving Joint Force and coalition interoperability, and improving command posts’ mobility and survivability. Each of these LOEs utilizes DevOps to leverage experimentation, place capability in the hands of Soldiers early on in development, and inform design choices for the delivery of future warfighting systems.

“Everything we’ve done up to this point with CP CE has been centered on Soldiers and early Soldier feedback,” said LTC Shermoan Daiyaan, Product Manager for Tactical Mission Command, assigned to PM Mission Command. “From the day we got the capability, we’ve constantly been putting it in the hands of Soldiers for them to give us feedback.”

By extending the framework of CP CE — being able to modify the system and write new capabilities on top of the existing one — PM Mission Command has been able to add features needed to carry out the mission and also ones suggested by Soldiers in the field. Variable Message Format was added to the software to serve as primary data exchange for messaging; three-dimensional maps and a DVR playback-like capability are currently undergoing lab testing at Aberdeen Proving Ground, Md., as a result of feedback from Soldier user juries.

Considering the need for command post mobility and survivability, CP CE has incorporated significant size, weight and power reductions. The hardware-dense information systems that reside in current command posts rob units of mobility because of the labor-intensive processes to transport, set up, initialize, maintain, and dismantle. New Tactical Server Infrastructure version 2 (TSI v2) server stacks will provide increased capacity and capability with three versions — small, medium, and large — depending on the mission need. CP CE infrastructure software will be integrated and automated with the server hardware to eliminate the need for manually loading the software.

“We’re fielding a different baseline of hardware with TSI. Currently, the Army has nine server stacks dedicated to mission command that weigh 1,200 pounds, while TSI v2 features one 350-pound stack,” said Daiyaan. “When the CP needs to move quickly, a nearly 900-pound reduction is huge.”

“The outcome of this experimentation will inform both the CPI2 requirements and designs going forward. Together these phases will enable final command post solutions to be designed, integrated and provided to the Army through an established program of record,” said Veronica Ewing, Deputy Project Manager for Mission Command.

With its role as the program’s central integrator, PM Mission Command is working to meet the necessary acquisition milestone to execute both the directed requirement and the formal CPI2 Program of Record at such time that the Army Requirements Oversight Council approves the CPI2 capability development document. A capability development document captures the information necessary to develop proposed programs, normally using an evolutionary acquisition strategy.

CPI2’s strategy is to bring together existing programs through a system of systems approach to achieve the Army’s vision. To keep pace with the rapid pace of technology advancements, the program will also work closely with the Army’s organic research community.

“We’ll continue to identify future S&T efforts, and then based on the schedule, see where those transition points can be inserted into production. We’ll leverage the expertise of the Army’s scientists and engineers in these technical disciplines.”

PM Mission Command is also using DevOps to explore potential improvements to the Army’s critical friendly force tracking system Joint Battle Command-Platform (JBC-P). Responding to units’ requests to take JBC-P features outside their mounted platforms, Army researchers are prototyping options for experimentation. The project, known as Expeditionary JBC-P (X JBC-P), aims to inform future decisions to deliver the vehicle-based Blue Force Tracking system’s capabilities to dismounted Soldiers. The goal is to develop a kit that is lighter and smaller, has a longer battery life, and is safe for Soldiers to use while dismounted. The components taken from the currently fielded mounted JBC-P system are too cumbersome and heavy for a Soldier to carry for long distances in a rucksack.

“Working on this project with PM Mission Command and tactical units has enabled CERDEC to rapidly provide operational capability to the Warfighter, successively providing improvements over a four-month sprint,” he said. “It’s been incredibly rewarding to see our concepts, analysis, designs, and adaptations go so quickly from the whiteboard into the hands of Soldiers.”

“The importance of Soldier feedback is paramount,” said CW2 Randy Smith, network operations technician, 67th ESB, 35th TTSB. “If you give a system to a Soldier they’ll show you how to break it, so by allowing them to work on it, troubleshoot and then observing what their needs are with it, you’ll be able to fine-tune whatever lesson plans, instructions, tactics, techniques and procedures you are providing.”

“The moment that we got the TRILOS out and we set up the tripod … we could tell they took a lot of time getting feedback from Soldiers,” said SSG Brad Bowen, Bravo Company, 67th ESB network operations. “It’s a much more thought out system, from the tripods to the antennas to how it interfaces with our current communication equipment. Soldiers seem to be able to comprehend this system much quicker.”

Following the DevOps process, the PM took Soldier feedback from the operational test last July directly to its industry partners. Together they integrated 12 refinements to the TRILOS radio within 45 days of the conclusion of a Network Integration Evaluation (NIE). The PM then demonstrated these enhancements during a full follow-on capability demonstration last September at Fort Hood, Texas, which enabled the 57th Expeditionary Signal Battalion and the 11th TTSB to see firsthand that its feedback had been heard and implemented and to ensure that the capability was ready to be fielded.

“What I thought was most impressive was the follow-up and then the response time in terms of speed to action,” said LTC Patrick Lane, Commander of the 57th ESB.

The Integrated Tactical Network and the Next Step

The Army Network Cross-Functional Team (CFT) is conducting experimentation to provide a portable, medium-to-high bandwidth beyond-line-of-sight communications and networking capability to allow Brigade and below formations to network locally and access mission command voice and data. Known as the Integrated Tactical Network, or ITN, the effort will enable commanders to lead and fight their formations from anywhere they choose.

“As new threats emerge, as new conditions emerge that commanders will have to operate in, the network is going to have to adapt,” said CW5 Brian Wimmer, senior technical advisor to the Network CFT. “It won’t be a snap-to-chalk line network where we’re going to field you all this kit and everyone’s going to have the same radio.”

The ITN began as a company-level DevOps experiment using a secure but unclassified network capability focused on the tactical edge by the 1st Battalion, 508th Parachute Infantry Regiment (1-508 PIR) of the 82nd Airborne Division. Success of the company event led to the equipping of the battalion for a Joint Readiness Training Center rotation last November, followed by platoon-level training exercises at Fort A.P. Hill—held this March—that expanded to include mission command capabilities. Program Offices are working closely with the Network CFT on the experimentation and proof-of-concept efforts underway with U.S. Army Forces Command units, including the 1-508 PIR and 1st and 2nd Security Force Assistance Brigades.

The outcomes of this process will inform technology selection and product development for future tactical radios products. Reaching out to industry partners and leveraging Soldier feedback from in theater, NIEs, and Soldier user juries and pilots will help the Army get needed capability into the hands of Soldiers at an accelerated pace, keeping them one step ahead as technology continues to evolve.

“The Army is working on quick-win solutions for the network while also looking for potential future capabilities,” said Maj. Gen. Peter Gallagher, director of the Network CFT. “We’re going to experiment, we’re going to demonstrate, we’re going to adapt and buy solutions that are already proven.” ν