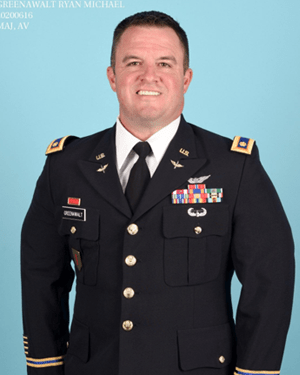 In 2005, he was assigned to the 3-4 Aviation Battalion (Air Assault) at Fort Hood, Texas, where he served as a flight platoon leader, maintenance platoon leader, and operations officer. Maj. Greenawalt also deployed in support of Operation Iraqi Freedom during his tenure with 3-4 Aviation Battalion. In 2007, Maj. Greenawalt served as an Assistant Team Chief of a Military Transition Team that supported the Operation Iraqi Freedom transition effort. In 2008 he served as the Battalion S3 for the Harrisburg Recruiting Battalion, and in 2011 he commanded the Harrisburg Recruiting Company.

In 2013, Maj. Greenawalt transitioned to the PA National Guard and served in a multitude of positions to include Lead Emergency Response Planner, Contracting Specialist, Assistant Product Manager (APM) within the Fixed Wing Project Office, PEO Aviation, and Army National Guard Liaison to the US Army Aviation and Missile Command. In 2020, he was assigned to the Future Vertical Lift Cross Functional Team as the Lead Integrator for FUAS.

A&M: Can you give us some background on the Future Tactical Unmanned Aircraft System or FTUAS?

Maj. Greenawalt: The RQ7 Shadow tactical unmanned aircraft system has been the workhorse for the U.S. Army for more than 20 years and continues to serve our formations with tremendous results today. In response to Operational Need Statements from several Corps and Division commanders for an RQ-7B Shadow replacement with a runway independent, organically transportable, reduced acoustic signature tactical UAS, the Army adopted a “Buy, try, inform” approach to developing FTUAS to meet the needs of the warfighter.

A&M: What exactly are you looking for in the RQ-7B Shadow’s replacement?

A&M: What features are most important? Why is it time to replace this system?

Maj. Greenawalt: All of the desired attributes are important and bring advanced capabilities to the Army’s tactical UAS. Runway independence provides significant agility to the employment of the system allowing for launch and recovery almost anywhere on the battlefield. The reduced logistical footprint provides a capability to conduct reconnaissance, surveillance, and target acquisition on the move. With a much quieter aircraft, the enemy is unaware of the FTUAS presence and the ability to organically transport the systems provides additional agility to the Brigade Combat Teams (BCTs).

Maj. Greenawalt: FTUAS will be used for similar missions we see today for the RQ7-B Shadow, however, offers more flexible, innovative, and agile ways of employing tactics, techniques, and procedures. FTUAS is not only becoming more expeditionary, but will deliver additional capability and battlefield sensors and effects for the Brigade Combat Team Commander in a modular and upgradable architecture.

A&M: Can you tell us about the recent FTUAS rodeo and how successful it was?

Maj. Greenawalt: The FTUAS Rodeo was the capstone event following a year-long exercises supporting the BCT. The FTUAS Rodeo was extremely successful. In addition to highlighting Army Futures Command innovative approaches to modernizing our Army, the final input from the Soldiers was collected and set conditions for the Army to accelerate finalizing extremely well-informed requirements.

A&M: How were the systems tested and what was the reaction to them?

Maj. Greenawalt: The systems were used by the Shadow Platoons of each BCT instead of their RQ7 Shadows during the approximately six months they were assigned. Each platoon took their FTUAS to a Combat Training Center as part of their BCT’s training exercise. Soldier reactions were very positive and while some recommendations for improvements were offered, generally most preferred their VTOL FTUAS over the RQ7 Shadow. Most of the Soldiers liked the ease and speed that it took to set up and employ the FTUAS.

A&M: What was learned during the demonstrations?

Maj. Greenawalt: Much was learned during the yearlong Soldier touchpoint both from tactical employment of these VTOL systems and technical specific aspects of the systems. Most notable was the relatively ease of set up and employment of the FTUAS. With just two or three Soldiers, the FTUAS were operational in under two hours as compared to the seven hours it takes six or seven Soldiers to employ the RQ7 Shadow.

A&M: Can you talk about the hands-on experience the five brigades had with the four systems over the last year?

Maj. Greenawalt: Each Shadow platoon had their system for approximately six months conducting home station training prior to deploying to a rotation at either the Joint Readiness Training Center at Fort Polk, LA or the National Training Center at Fort Irwin, CA for participation in large scale combat training and recovery almost anywhere on the battlefield. The reduced logistical footprint provides a capability to conduct reconnaissance, surveillance, and target acquisition on the move. With a much quieter aircraft, the enemy is unaware of the FTUAS presence and the ability to organically transport the systems provides additional agility to Brigade Combat Teams.