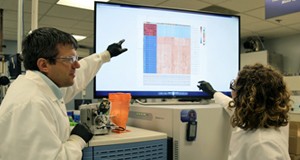 By looking at biomarkers in blood, scientists at the U.S. Army Research, Development and Engineering Command Edgewood Chemical Biological Center (RDECOM ECBC) may be able to diagnose low-level opioid exposure as long as two weeks after the event.

“This is unprecedented research that lays a strong foundation for future work in opioid exposure detection and medical responses to that exposure,” said research biologist Trevor Glaros, Ph.D. “As opioids continue to post a significant threat domestically and on the battlefield, this research is a game changer that will help keep people safer and potentially save lives.” The findings were presented in a paper by Glaros and his team published in Toxicological Sciences, considered the most influential research journal in the field of toxicology.

“This is an ultra-potent opioid, and the level it would take to intoxicate you is incredibly hard to detect, especially in sub-lethal amounts,” said Elizabeth Dhummakupt, Ph.D. “We can barely detect lethal amounts. If you were exposed, but unsure, we might have a hard time telling if it was carfentanil.”

Instead of seeking to detect the opioid itself, researchers found that they may be able to correlate low-level exposure to blood-based biomarkers and then make a diagnosis.

“What we’re looking to find is what in the body changes which we can measure to say if someone was intoxicated by carfentanil,” Glaros said. “For example, if these four proteins change in this particular pattern, then they were likely victims.”

In as quickly as six hours, scientists can observe protein and metabolomic changes following exposure. Those signs can still be seen as long as two weeks after exposure.

“It’s a game changer for that compound,” he said. “There’s almost nothing in the literature on it. Most of the research is on large animals, because it was developed as a tranquilizer. There’s nothing for humans.”

There remains just one response to an overdose: Narcan — a drug that reverses the effects of an overdose. However, the research will help warfighters, first responders and law enforcement officers dealing with opioids.

“The immediate response is always the same, but the benefit here is that it can inform first responders and police that there may be a bigger problem on their horizon,” Glaros said. “If somebody got hit with it, it would be a long time before you could detect the chemistry. Now, police can be aware that carfentanil is out on the streets and they can be better prepared. It generally happens in clusters.”

Similarly, this could help the warfighter identify threats and execute countermeasures.

Glaros said his team is looking for additional funding to continue research.

“This program is no longer funded,” he explained. “Our hope is that now that we have established these capabilities at ECBC that we will get funding to continue similar types of studies with other poorly characterized threat chemistries.”