Delta Company’s Deactivation: What Does the Future Hold for USMC Tank Battalions? 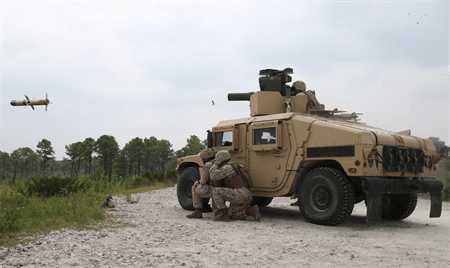 On Thursday, June 4th 2015, Lieutenant Colonel Robert J. Bodisch presided over the deactivation ceremony for one of his battalion’s tank companies, an operational loss of fourteen M1A1 main battle tanks, leaving the 2nd Marine Division’s 2nd Tank Battalion able to field only three companies at any one time.

Bodisch predicts Delta Company’s deactivation marks the beginning of events that will lead to long term impacts to the USMC tank community’s ability to retain personal, in turn impacting the service’s capability to field tanks in significant numbers, with skilled crews.

“It’s interesting to see the progression of Marine Corps tank formations since Desert Storm,” according Bodisch, who spoke with Armor and Mobility Magazine on June 3, 2015.

Initial reductions came when our tank battalions upgraded to the M1A1 in 1991, replacing Cold-War era M60A1 tanks. Prior to adopting the M1A1, USMC tank platoons were each assigned five M60A1 tanks. Moving to the M1A1, at four vehicles per platoon, effectively cut the equivalent of a platoon (four tanks) from each tank company, Bodisch explained.

“Years later, after a 2010 force structure review, it became apparent the Corps began looking to reduce tank numbers, so when cuts were made in 2012 they targeted the Marine Corps Ground Combat Element [GCE], unfortunately this trickled down, it was 2nd Tanks that took some of the reductions.” An artillery battery was also eliminated as were two companies from 2nd Assault Amphibian Battalion, and the 8th Marine Regiment was disbanded, then recomposed, a move Bodisch said remains “an ongoing effort.”

Outlining the progression of decline in USMC tank inventories, Bodisch remarked “overall since Desert Storm we had a 54% reduction in tanks and 88% for TOW anti-tank missile systems, it’s pretty significant, if you break it down, in every major conflict since Desert Storm, the Marine Corps has averaged a 25% cut in tanks and HMMVW mounted TOW systems.”

Next February, 2nd Tanks will likely deactivate another of its line companies, “this time Charlie Company, and it will happen about four months before I relinquish command of 2nd Tanks,” he added.

With the deactivation of half of 2nd Tank Battalion’s M1A1 inventory, the Marine Corps with be left with only one fully equipped active duty tank battalion, based at the Marine Corps Air Ground Combat Center Twentynine Palms, California. “Only 1st Tanks will have the full complement of 58 M1A1 tanks and 26 HMWWV mounted TOW systems, 2nd Tank Battalion will have 30 M1A1 tanks and zero TOW systems,” Bodisch lamented.

Yet 30 M1A1 vehicles remaining at 2nd Tanks does not translate to total availability, “it’s not an accurate number, keep in mind no less than eight tanks will constantly be deployed, one platoon attached to a Marine Expeditionary Unit (MEU), and starting in August, another platoon for the Black Sea Rotational Force (BSRF) in Eastern Europe, leaving a maximum of twenty-two M1A1 tanks available to support an entire division here at Camp Lejeune and form the next MEU and BSRF tank platoons,” Bodisch said.

Half the Assets – Double the Deployments

Cuts in USMC armor end strength hit 2nd Tanks in near parallel to an increase in operational tempo. According to Bodisch, a platoon from 2nd Tanks has been attached to a newly forming ground combat element slated for deployment to Eastern Europe.

“In August, we’ll have to start sourcing a tank platoon for Eastern Europe and they’ll rotate each six months, it’s part of the BSRF, so now we have increased our operational requirements just as Delta Company’s deactivation cut available tank platoons by three…and keep in mind, to deploy a single platoon actually commits three…these rotations normally have one platoon deployed, one training up to relieve the deployed platoon, and one that has recently returned,” Bodisch said.

“The 3rd Battalion 8th Marines has been selected to form the nucleus infantry battalion for [this winter’s] rotation,” Bodisch confirmed. He noted the deployment’s unique composition, the first time a USMC crisis response force is being assigned heavy armored vehicles. “We’re calling the armored formation, with the Light Armored Vehicles tanks, and artillery, the Combined Arms Company,” he added.

2nd Tank battalion is also tasked to provide a tank platoon deploying every six months on shipboard rotation supporting the 22nd, 24th and 26th MEUs. The amount of multiple simultaneous deployments will stretch 2nd Tank Battalion assets and Marines more than in the recent past.

“We currently source operational tank platoons for MEUs, these platoons are deployed aboard amphibious assault ships, however next year when we lose Charlie Company that’s another three platoons we won’t have available,” according to Bodisch.

“When I was asked if we could provide a tank platoon for the BSRF, my response was yes, of course we can, I had to advise the 2nd Marine Division Commanding General that sourcing the BSRF requirement on top of the MEU requirements will limit our ability to source any other additional requirements such as supporting more than one Integrated Training Exercise (ITX in Twentynine Palms), supporting Infantry Battalion Marine Corps Combat Readiness Evaluations (MCCRE), and limit our own ability to conduct Battalion level training,” Bodisch said.

“There are other impacts; 1st Tank Battalion will likely have to support an increased number of ITX training rotations, which could reduce their own ability to conduct battalion-level training, 2nd Tanks will no longer have a Scout or Anti-Tank TOW platoon, so it is quite possible you’ll have generations of officers that have never seen, never mind tactically employed such assets” Bodisch advised.

Continuing, Bodisch warned “one day those officers are going to become company commanders, you could conceivably have someone become the battalion commander of 1st Tanks having never seen a scout or TOW anti-tank missile platoon, I have worries about that, and so what’s going to suffer is our ability to fight as a battalion.”

“It’s a hard pill to swallow when combat power is cutseems like ground combat power is taking the hit, when I took command of 2nd Tanks, we had over 800 Marines in the battalion, now we’re down to 650, next year at this time, when I give up command we’ll be 500 or below,” Bodisch added.

A Career in Tanks? – A Hard Pill to Swallow

Bodisch clearly envisions ongoing cuts will result in potential personnel retention issues arising in the next few years “there’s going to be some speed bumps two to three years from now, we looked at the problem, the human factors, there’s likely to be an impact.”

With two tank companies on the East Coast, most tank billets will be assigned to Marine Corps Air Ground Combat Center Twentynine Palms, located in a remote desert area of southern California.

Bodisch envisions real trouble for tank battalion staffing and the real possibility an irreparable loss of institutional knowledge over the next few years as 1st and 2nd Tank Battalions become very different images of each other.

Mirroring the two Marine Corps tank battalions, each with the same levels of equipment and staffing “appears to alleviate many of these human factor issues and helps retention goals, placing more equity in one’s career possibilities,” according to Bodisch.

“We’ll be able to fully crew our future allotment of 30 tanks and expect to be able to do so, I have 44 tanks on the ramp today and can crew them all, next February we’ll be down to 30 tanks with the deactivation of Charlie Company,” 2nd Tanks is also sufficiently equipped with M88A2 Hercules armored recovery vehicles, able to conduct repairs and extract tanks while under fire.

As the US Army moves to a fleet of common M1A2 SEP tanks, the Marine Corps has no plans to replace its current M1A1 inventory. “We expect to keep our M1A1 inventory in service until the 2050 timeframe,” according to Bodisch. For Marine Corps needs, Army M1A2 SEP main battle tanks, are beginning to exceed 70 tons, are too heavy for transport on Navy Landing Craft Utility (LCU) and on the Landing Craft Air Cushioned (LCAC) (Textron Marine and Land Systems) ship to shore connectors.

USMC M1A1 tanks have undergone numerous upgrades and product improvements ensuring relevance on the modern battlefield. Bodisch pointed out due to the number of modifications, USMC M1A1 tanks are highly differentiated from older Army and internationally exported M1A1 tanks “we have a Deep Water Fording Kit and have modified our M1A1 with a stabilized commanders weapon station allowing firing the .50 caliber machine gun at night while on the move, engaging targets independent of the main gun, so the upgrade lets us take on two targets simultaneously.”

Reminiscent of older flechette rounds available for 105 mm main tank guns, Bodisch said Marine M1A1 tanks now employ 120 mm canister rounds filled with 1100 steel balls, ideal for anti-personnel targets. A new multi-purpose main gun round with data links on the cannon breechblock allow firing modes to be selected and entered as the round is loaded is also in use. “We also have the tank-infantry phone, as we’re an integrated infantry support platform, infantry need to be able to communicate with tank crews,” Bodisch said.

Asked if the USMC M1A1 main battle tank is a survivable platform, Bodisch explained “my tank was hit with several rocket propelled grenades (RPG) in Fallujah, the first, an RPG-7, it hit the main gun, knocking it out battery, no crew injured, the tank was back in operation in two weeks.”

A second RPG struck his tank’s slip ring, severing hydraulic lines needed for power turret control. Crews had the damage repaired in a day. A third RPG impacted the tank’s unarmored skirt, without detonating “probably something to do with the spacing behind the skirt, my loader, an artilleryman jumped off the tank just as I was calling for an explosive ordinance disposal team, he grabbed the RPG and pulled it out of the skirt, he was lucky,” Bodisch recalled.

“AK-47 rifle fire later damaged the tank’s forward unity periscope lens again Bodisch said, The damage was quickly repaired, never required his vehicle to cease combat operations. Commenting further on the M1A1 defensive qualities, Bodisch said, “we had no K-kills, we had some mobility kills that were repaired that day…my executive officer hit a land mine that blew off his track and some road wheels, this was repaired in hours, we had antennas and infantry phones shot off pretty regularly, one tank was hit with a mortar round on the turret roof, besides injuring the tank commander and loader, the vehicle suffered no damage.”

Bodisch said the cuts to 2nd Tank Battalion seem relatively unknown inside the service “there’s not a lot of people inside the Marine Corps that know we’re cutting so much combat power, it was just until 2013 that Delta Company was in Afghanistan, every single unit in 2nd Tanks was constantly being deployed.”