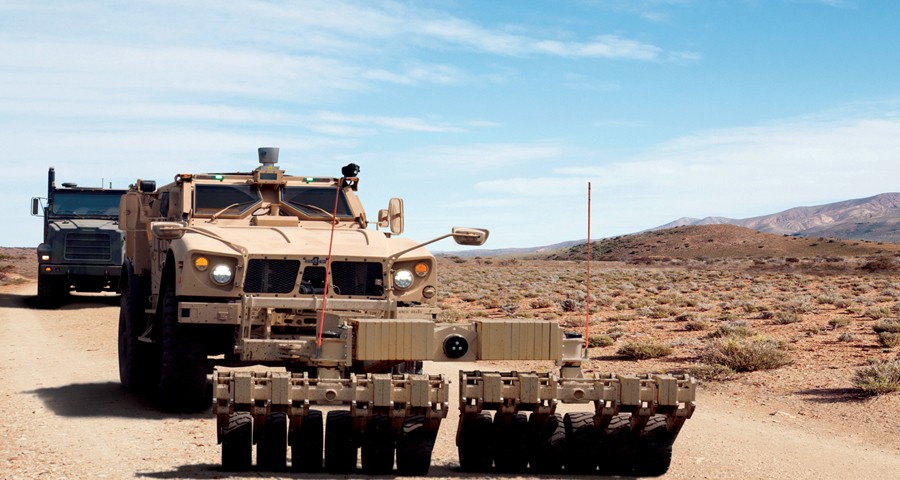 Commercial technology advancements are accelerating at a rapid pace, as evidenced by recent self-driving vehicle programs from Google, Uber, GM, Tesla, and Volvo.

The U.S. Army and U.S. Marine Corps have been quietly experimenting with highly specialized autonomous vehicle technology as well. While military vehicles are not yet navigating through their missions on their own, the military has made enormous strides in making tactical wheeled vehicles more capable off-road over the past 10-15 years. The addition of autonomous vehicle capability represents a substantial force protection and driver safety advantage while also providing a more efficient means of field logistics, both in supply and maintenance support.

Autonomy as a Force Multiplier

Autonomous vehicles will be a critical transformational technology in the future, lending itself to the U.S. Army’s Robotics and Autonomous Systems (RAS) Strategy, which seeks to leverage advances in technology to achieve a strategic force multiplier advantage over future adversaries. This strategy allows the military to improve the combat effectiveness of the future force, by emphasizing human-machine collaboration to achieve tactical and operational gains.

While there is a lot of work to be done, investments in autonomous technology and phased driver safety improvements, have so far yielded valuable insight. Oshkosh Defense has been developing and successfully demonstrating autonomous capabilities with TerraMax® Unmanned Ground Vehicle (UGV) technology since the very first DARPA Challenge in 2004.

TerraMax® UGV is designed as a scalable kit that can be integrated into current production vehicles as they are built on the assembly line, or even retrofitted to legacy vehicle fleets, without compromising the vehicles original performance or payload capabilities. TerraMax® UGV technology has been tested and evaluated on four distinct Oshkosh vehicle platforms – the Medium Tactical Vehicle Replacement (MTVR), the Family of Medium Tactical Vehicle (FMTV), MRAP All-Terrain Vehicle (M-ATV) and the Palletized Loading System (PLS) – and kits can also be developed for other original equipment manufacturers (OEM) vehicles.

For over a decade, Oshkosh has been developing, validating, and maturing automotive active safety, advanced drive assist systems, and robotic, automated driver capabilities to be integrated on any tactical wheeled vehicle. Specifically, Oshkosh’s By-Wire Kit integrates relevant vehicle components such as steering, engines, brakes and transmission with active safety sensors. On-going testing continues to validate the strict autonomy requirements of high reliability and interoperability in Army test and evaluation scenarios, such as convoy operations.

This is a critical period for autonomous technology as proof-of-concept testing moves from lab to extended field testing. There is a need to invest in practical experience with troops and continue maturing the technology. Specifically, the Autonomous Ground Resupply (AGR) program is exposing soldiers to the autonomous system, and introducing the system to operationally realistic conditions. Field testing based upon these real-world scenarios allows for proactive rather than reactive development in anticipation of future conflicts.

Today, Oshkosh continues to mature and advance autonomous ground vehicle capabilities by working side by side with the military as well as technology leaders to determine the best way to integrate ground autonomy into joint maneuvers while maintaining high tempo operations. Investing in the development of operation concepts now and putting the technology into the hands of troops will ultimately fuel the success of UGVs when they are fielded in the future.