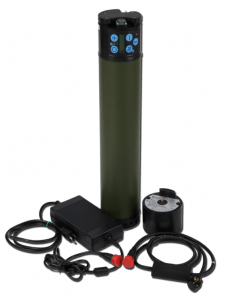 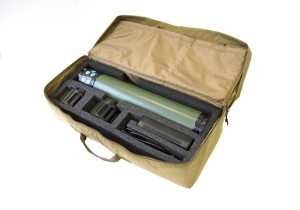 Portable oxygen technology is now easier than ever to carry around on the battlefield. The SAROS Battlefield Oxygen System is a newly acquired device in the U.S. Army’s arsenal of life-sustaining equipment in combat.

USAMMA is expected to field the generators in its kits, such as air and ground ambulance, unit assemblages provided for forward surgical teams, EMT/trauma, pre-op and intensive care ward/post-op.  The SAROS will augment the ‘D’ cylinder for patient care and transport, providing a continuous supply of oxygen for non-critical patients using rechargeable batteries or standard electrical power.

“Instead of lugging around 10 cylinders weighing nine pounds each, a medic now has a 12-pound device, which runs on a rechargeable battery and can produce three liters of 93 percent oxygen per minute,” said Maj. Norland James, assistant program manager of health care technologies at the USAMMA. “This is going to save the government countless dollars and reduce the giant logistical footprint that we have when it comes to patient care oxygen in the field.”

Besides its low weight, 30 percent lighter than a comparable commercial device, the generator also maintains the shape of a traditional cylinder. Most commercial oxygen generators are box-shaped. However, the Army required this device to fit where any regular cylinder would go on a Mine-Resistant Ambush Protected (MRAP) vehicle or Humvee. This allows it to secure into the existing oxygen storage racks of Army evacuation vehicles.

The SAROS Battlefield Oxygen System was developed under a cooperative agreement between SeQual Technologies and USAMMA to address the logistical and safety challenges associated with high pressure oxygen cylinders in an effort to provide medical grade oxygen far-forward on the battlefield. SAROS provides a safe, lightweight, reusable and rugged solution that meets the rigors of the battlefield and medical evacuations. Since 2012, SAROS has been used by Special Operations Teams around the world, customizing kits with the SAROS to meet the demands of their missions and to save lives.

SAROS is not the first portable oxygen system to be deployed by the Army. In 2002, MRMC partnered with SeQual to develop a 10-pound system. Technology at the time allowed an 18-pound device, The Eclipse® Oxygen System, designed for patients with COPD in the commercial markets.

In 2008, the Army started deploying a ruggedized version of the Eclipse in their ground ambulances following an oxygen cylinder explosion inside an MRAP vehicle. The explosion injured multiple soldiers and destroyed the vehicle. USAMMA continued the developmental efforts with SeQual Industries to make a lighter, equally robust product that would fit in the “D” cylinder racks of the ground ambulances. The culmination of  the project became the SAROS Battlefield Oxygen Generator.