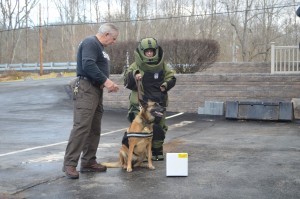 In the latter part of the 20th Century, reaction to terrorist attacks predominated the response by civil law enforcement and the military. After each incident, strategic and tactical approaches have evolved to focus on the identification and neutralization of IEDs, the favored weapon of 21st foreign and domestic terrorists, said Ryan J. Morris, CEO of Tripwire Operations Group, based in Gettysburg, Pennsylvania.

“Being able to identify IEDs and home-made explosives is a critical skill for today’s law enforcement officer,” said Morris, a veteran police officer, who was in charge of Penn State’s bomb squad and former Department of Homeland Security Supervisory Explosive Specialist. “We know that pipe bombs and other explosive devices were used by the suspects in both San Bernardino and Paris; and in the recent attacks in Belgium, suicide bombers wore Triacetone Triperoxide, TATP, explosive devices.”

Other team members include Josh Mills, the military explosives technician; J.R. Huff, program manager of the K-9 training unit, a retired law enforcement officer from Georgia; Michael Loney, a K-9 trainer, who worked for a police department in New York City; and Joris Kerckhof, a retired Belgium Federal Police K-9 trainer, who serves as the international program director. In 2005, Tripwire was awarded a $1.5 million Department of Military and Veterans Affairs contract to train first responders in the National Incident Management System, (NIMS), as well as weapons of mass destruction training as part of the Northeast Counterdrug Training Center), for law enforcement, fire and EMS, personnel and first responders at Ft Indiantown Gap, Annville, Pa., headquarters for the Pennsylvania National Guard.

When bomb disposal units respond to an active incident, fire and EMS personnel provide support, in the form of fire, rescue, emergency medical, traffic and crowd control services, Morris said. Tripwire trains first responders to get people out of bomb suits. They also learn about blast effects and bomb-trauma related injuries. Tripwire has provided explosive related training and products to the Department of Defense, many federal law enforcement agencies and hundreds of state and local government agencies—the U. S. Department of Defense, ATF, FBI, Secret Service, the Virginia State Police and the New Jersey State Police.

“For dogs, the smell of an explosive changes with its amount. If the dogs are trained to detect a pound of ammonium nitrate, they may miss something the size of Timothy McVeigh’s truck bomb,” said Morris. “Most departments train on small amounts of explosive because they have neither the money nor the resources to buy and store massive bulk. Tripwire overcomes this by offering the resources and facilities to train canines on bulk odor recognition. Tripwire’s K-9 training courses place particular emphasis on a wide range of conventional and homemade explosives in varying quantities.”

“Once you have detected and identified the IED, you need the tools to render it safe,” Morris said. “A vehicle with a hundred pounds of dynamite and packed with roofing nails and ball-bearings is going to require a specific tool: namely Tripwire’s Aquaram Mini. The Aquaram family of tactical disruptors is designed to neutralize threats ranging in size from suspicious packages to cargo containers.”

Recently, Tripwire partnered with ScentLogix, an Annapolis, Maryland, company that specializes in the “cross-science area of biological olfaction and scent detection,” said David Adebimpe, CEO of Polymath and ScentLogix. “The K-9 Explosives Scent Training Imprint Aids and Kits and other training tools are based on a convergent science approach that uses the olfactory prowess of canines as the underpinnings of foundational R&D investigations in biological olfaction and olfaction-based detection.”

In April, Tripwire partnered with Falcon Tactical Solutions, a Beernem, Belgium-based supplier of tactical equipment and training for European military and police units, to demonstrate the Secotron interactive, smart target system. Used by military and law enforcement units in Europe, the system can be programmed for various training scenarios, according to Jean Nicodeme of Falcon. Smart targets can be used for training in a shoot house; CQB, (close quarters battle); or indoors or outdoors. It is a portable, easy to use, system.

Designed to train police and military personnel to be alert to their surroundings, the smart targets can be used in tandem with simulated explosions, changes in ambient light and other environmental factors. An instructor has the ability to change the target responses at any time during a training session. Tripwire is now licensed to manufacture and market the Secotron system in the U.S., said Morris.

“Our training constantly evolves to meet the needs of the specific target audience to which it is being presented and provides the most up to date information in all chemical, biological, radiological, nuclear, explosive (CBRNE) disciplines,” Morris said. “Working with explosives is inherently dangerous work, whether you’re a K-9 handler, bomb technician or other first responder. You need an unparalleled degree of professionalism in order to deal with conventional and homemade explosives.”