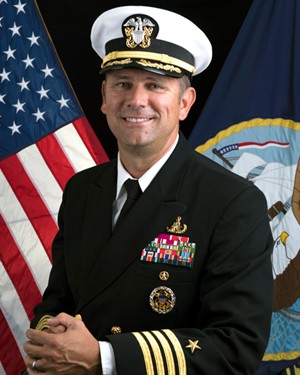 CAPT Chris Merwin assumed duties as the Director of the Mine Warfare Division at the Surface and Mine Warfighting Development Center and the Vice Commander, Navy Mine Warfare Battle Staff in October 2016. CAPT Merwin is qualified as an EOD Officer, a Master EOD Technician, a Naval Parachutist, and a mixed-gas diving and salvage officer. He has a master’s degree in National Security and Strategic Studies from the Naval War College.

Originally from Florida, CAPT Merwin graduated from the University of South Carolina and received his commission through the Naval ROTC program in 1991. After completing initial Surface Warfare and Diving and Salvage training he served at sea aboard the USS BEAUFORT (ATS -2) and at Mobile Diving and Salvage Unit ONE before attending Explosive Ordnance Disposal (EOD) School.

Upon designation as an EOD Officer he was assigned to EOD Mobile Unit (EODMU) SIX as an Officer in Charge of a Mine Countermeasures (MCM) detachment where he deployed to conduct underwater mine countermeasures in the Arabian Gulf. He was Operations Officer at EODMU TWO and Executive Officer at EODMU FIVE, where in 2006 he deployed to Iraq as the Officer in Charge of the Combined Explosive Exploitation (CEXC) Cell for Task Force Troy. In 2009 he took command of EODMU TWELVE and deployed the unit to Iraq as the Joint Counter-IED Task Force for U.S. Division North in support of the Third Infantry Division. In 2014 he was assigned as the Deputy Commander at EOD Group ONE where he deployed as the Initial Operational Capability Commander of the Navy Expeditionary Forces Command Pacific and Commander Task Force 75 prior to assuming command of EOD Group ONE. As Commodore he was the EOD community lead for Mine Countermeasures and was instrumental in the development of Expeditionary MCM.

A&M had the opportunity to speak with CAPT Chris Merwin, SMWDC Mine Warfare (MIW) Division Director, regarding some focus areas for the Navy’s current and forward-looking objectives for mine warfare readiness in combatting present and future maritime threats.

A&M: With the convening of the inaugural MIW WTI class this past summer, can you provide some information about the program?

CAPT Merwin: In general, Warfare Tactics Instructors (WTIs) are dedicated to increasing the lethality and tactical proficiency of the Surface Force across all domains, and enabling Surface Warriors to fight and win the high-end fight. Top-talented junior Surface Warfare Officers apply for the WTI program, and once selected become WTI-candidates, receive training, and become expert warfighting tacticians in one of four Surface Warfare areas. After completing the requisite WTI course of instruction, they become qualified patch-wearing WTIs.

The MIW WTI program consists of a 30-week syllabus, with the majority of training (21 weeks) conducted at the NATO Naval Mine Warfare School in Belgium. MIW WTI candidates complete additional training in San Diego and Norfolk to become acquainted with Aviation and Underwater Mine Countermeasures (AMCM and UMCM) capabilities.

Qualified MIW WTIs will integrate and learn alongside SMWDC’s AMW Division in Little Creek to understand the linkages in planning and execution with amphibious operations. MIW WTIs may be assigned to positions in Belgium, Norfolk, San Diego, or Mayport.

A&M: What is the MIREM program?

CAPT Merwin: MIREM is the Mine Warfare Readiness and Effectiveness Measuring (MIREM) program. The MIREM program collects data and conducts analysis to assess the readiness and effectiveness of in-service MIW systems, sensors, personnel, command & control structures, and tactics. It then provides decision makers access to data and analysis to weigh decisions on proposed improvements to existing systems or development of new systems.

MIREM data and analysis further informs evaluation of next generation systems of emerging technology in support of the MIW mission. Planners and model builders use this real-world data to produce realistic performance characteristics in simulations.

The Commander, Surface Warfare Development Group initiated MIREM in 1995, (OPNAV) N85 Expeditionary Warfare, chartered MIREM in September 1996. Today, OPNAV N95, director of Expeditionary Warfare, provides oversight of CNO staff responsibilities pertaining to amphibious lift, mine warfare, naval fire support, and other missions essential to Expeditionary Warfare, and leads the planning, programming and budgeting for acquisition, operational readiness, and modernization of the Navy’s broad portfolio of Expeditionary Warfare capabilities.
The Navy conducted 36 MIREM events across nine distinct locations between 1996 and 2009. The program was suspended in 2009 due to ineffective leveraging of feedback to facilitate fleet improvements.

Established in 2015, SMWDC MIW Division assumed MIW leadership and subject matter expert roles during the deactivation of Commander, Mine Warfare Command (COMINEWARCOM). Senior Navy leadership in 2017 re-established the readiness and assessment program for MIW, and restored the program in 2018. MIREM event 18-1, conducted on the East Coast, was an Aviation Mine Counter Measure (AMCM) Sea Wall Sweep assessment and was the only event conducted in Fiscal Year 2018. The feedback and lessons learned were documented and shared with the AMCM community. The results recommended changes to the current Naval Air Training and Operating Procedures Standardization (NATOPS) program procedures and sweep tactics.

Fiscal Year 2019 saw the execution of one MIREM event. Event 19-1 conducted an evaluation of SQQ-32 Mine Hunting Sound Navigation and Ranging (SONAR) Through-the-Sensor software on a Surface Mine Countermeasure (SMCM) platform in the C5F operating area in conjunction with CTF-52 staff. The results validated that the use of software maximizes sonar performance and were documented and shared with Mine Countermeasure Squadron (MCMRON) Five and MCMRON 3 staffs.

In Fiscal Year 2020, two events are planned for execution. Event 20-1 is a C7F Intelligence Preparation of the Environment (IPOE) assessment in the Korean Theater, planned for spring 2020. Event 20-2 is a near surface system and tactics assessment planned for early summer 2020 in the C6F theater that will assess Airborne Laser Mine Detection System (ALMDS) from an MH-60S Seahawk platform, and a Mark (MK) 18 Mod 2 Undersea Unmanned Vehicle (UUV) with an integrated Autonomous Topographic Large Area Survey (ATLAS) SONAR.

A&M: What are the primary objectives of the MIREM program?

A&M: Who are the key MIREM participants? What is their role?

A&M: What is the way ahead for the MIREM program?

CAPT Merwin: In Fiscal Year 2021, the funding line shifts from PMS 495 to the Fleet with three events planned for execution. SMWDC will become the Funding Manager, and will award a new Resource Efficiency Management (REM) contract to support data collection and analysis efforts. The goal is to finalize 5-year execution plans to get ahead of the planning, and to conduct a Concept Development Conference for Fiscal Year 2021 in February 2020.

Ultimately, the goal is to provide a formalized readiness and assessment program to improve Fleet tactics and inform system and sensor performance. This will further enable development, refinement and validation of current tactics, techniques, and procedures.