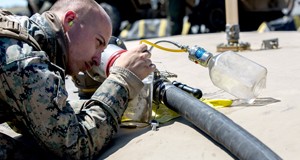 The Defense Logistics Agency (DLA) National Account Manager (NAM) team is working closely with the U.S. Marine Corps to ensure readiness regardless of location or conditions.

Marines have historically worked in austere environments and virtual isolation. Self-sufficient, they’ve learned to solve problems on their own.

Relying on anyone outside their immediate sphere is contrary to Marine Corps ethos, said Col. Steve de Lazaro, Marine Corps National Account Manager for the Defense Logistics Agency (DLA). He also mentioned that his team ensures the Marine Corps understands what DLA can offer it as an expeditionary force supporting naval and joint operations. “The art of that comes in when you can marry up the service’s needs with the capabilities DLA has,” de Lazaro said.

Nurturing relationships with subject matter experts at DLA’s headquarters and major subordinate commands is key to getting the right data to Marine Corps partners. “Having all the NAM teams next door to one another is a great way to bounce ideas off each other and find out what one service might be doing, even borrowing good ideas,” de Lazaro noted. “That’s why they pull us into DLA, to bring that operational experience and see how we can apply those DLA capabilities to some of the problems and challenges we’ve seen as operators.”

The NAM team gets daily calls from Marines who need help developing solutions for a variety of operational logistics problems and clarifying how DLA processes can help them, de Lazaro said. “We do a fair bit of trouble-shooting as we focus on operational and strategic programs,” he said. “We give them a good answer or we direct them to the folks they need to be speaking with. That’s another facet of the NAMs’ job – not necessarily solving everybody’s problems, but getting them connected to the right people.”

Like most of the Marine Corps NAM team members, Senior Logistics Specialist Tom Adissi is a former career Marine who served for 23 years. “Helping the Marine Corps get tied in from a service perspective and understand how the industrial base keeps that going – that’s the big motivation,” Adissi said. “The team helps Marines adjust some of their processes and procedures to leverage DLA support.”

From Additives to Acquisition

A priority for the Marine Corps and DLA is increasing the use of additive manufacturing. Manufacturing parts with a 3D printer reduces time and cost, especially compared to ordering specialized parts that may not be readily available. The service hopes to have Defense Department guidance on certification and testing of 3D parts in the coming months, Adissi said. Until then, DLA will continue pursuing additive manufacturing opportunities with Marines.

The NAM team is also working with Marines to get involved earlier in the service’s acquisition process for vehicles and parts, such as with the Joint Light Tactical Vehicle being fielded to Marine Corps units in the next few months. The agency already has the majority of the parts cataloged and provisioned, which allows supply planning for as many as 10,000 parts and eliminates the need for extended contracted support, Adissi remarked.

“Early inclusion of DLA in the acquisition process eliminates the two- to three-year process of establishing cataloging data for the parts and appropriate industrial base support after the weapons system is fielded,” he added.

Customer support representatives (CSRs) like Dean Cassel are also a valuable part of the NAM team and regularly interact with Marine operating forces and supporting commands. Cassel has been a CSR to the Marine Corps for 11 years and is co-located with Program Executive Officer Land Systems and Marine Corps System Command customers in Quantico, VA. He answers requests for assistance, trains customers to use DLA ordering and self-help tools, and helps solve emerging issues. Because of his military and civilian experience, his customers know him and continually seek his help. “To build trust, you show up; and when I say that, I mean you show up to their meetings when you get invited,” Cassel indicated. “You show up and talk to them on a daily basis. I don’t sit at my desk all day. I walk around, I talk to these people and I ask them what’s going on.”

Errors in the service’s stock control system and Distribution Standard System recently sent Marine Corps stock to DLA Disposition Services for disposal. The stock, worth more than $1 million, included items needed to complete an upgrade of the Marine Corps’ medium tactical vehicle fleet. “They needed immediate assistance to get this stuff back. I made the phone calls and connected all the dots, discovered what actually happened and was able to explain that to the different commands,” Cassel said.

“NAM team members rely on the CSRs to identify, engage and resolve issues for the Marine Corps commands they support, keeping the team informed as they work various issues,” de Lazaro emphasized. “There are times when resolution requires a more holistic response from the agency. The NAM team may be able to anticipate obstacles and request resources from DLA directorates or MSCs. This was the case with the Marine Corps stock scheduled for disposal,” he added. “We assisted Dean by enlisting the support of various subject matter experts across DLA Logistics Operations, DLA Finance, DLA Distribution, and DLA Disposition Services.”

Tom Stevenson, assistant program executive officer for acquisition, logistics and product support at the Program Executive Office Land Systems (PEO LS), can testify to Cassel’s commitment to the service. Stevenson has spent the past 10 years at PEO LS arranging acquisition support for the Marine Corps’ transportation equipment. Cassel recently helped him resolve thousands of discrepancies between Marine Corps data systems and DLA’s weapons systems support database. “His expertise has allowed for orders to flow smoothly between our Marines and DLA,” Stevenson said. “A lot of work was done by my folks, but Dean helped make sure we were getting the right information so we knew what to go fix in terms of the data.”

Stevenson recounted a 2017 incident when the Marine Corps noticed the cost of parts for its medium tactical vehicle replacement trailer had skyrocketed. Because DLA had made no purchases within the last couple of years, the production line had gone cold, he noted.

Working with DLA’s Logistics Information Service and DLA Land and Maritime, Cassel helped Marines correct technical data and drawings, which enabled DLA to competitively procure the parts and return costs to normal. “I researched the technical data and found that the drawing they provided had errors, causing the DLA supply chain to try and procure the parts from the trailer’s original manufacturer,” Cassel said. “These items had a cold production line which had to be restarted, raising the costs by 1,000%.”

“Problems and issues like this aren’t easily resolved without the NAM team helping the Marine Corps,” Adissi added. “We should be their focal point. All their questions should come to us; we have the expertise to fan it out to the enterprise as opposed to them going to all the MSCs,” he said. “The front door for them is us.”