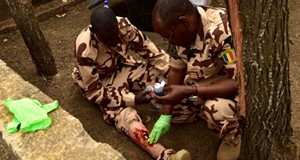 Soldiers wounded on the battlefield, either real-world or in an exercise, may require immediate trauma care prior to being sent to a hospital. A recent annual U.S. Special Operations-sponsored tactical combat casualty care (TCCC) exercise called Flintlock 2019 involved 1,800 participants from more than 30 countries, and was the perfect venue to provide advanced medical training for those tasked with responding to injuries on the battlefield.

At a small outstation called Pô in Chad, Africa, two members of the Chadian army’s medical corps, using skills learned in Flintlock 2017, teach Tactical Combat Casualty Care (TCCC) to nearly 100 Senegalese, Nigerian and Burkinabe partner forces. TCCC is the U.S. Department of Defense’s standard of care in pre-hospital combat zone medicine and injury management. TCCC provides data-driven, evidence-based, life-saving techniques and strategies for providing the best trauma care to soldiers on the battlefield. For Chadian Army Maj. Ahmat Ali Abramane, who has been to Flintlock many times before, always as a trainee, this year was different for him and his nurse partner, Sgt. Maj. Djeudonnè Bal-Bah Tchaga. Abramane and Tchaga used their training from Flintlock 2017, and experiences gained from deployments supporting various task forces and the United Nations Multidimensional Integrated Stabilization Mission in Mali, to become instructors for the Chadian army and partner forces.

“Chad is the first African nation to have its medical personnel certified by the National Association of Emergency Medical Technicians to teach Tactical Combat Casualty Care,” said Col. Kelly Murray, command surgeon from U.S. Army Africa, who led many of the military training classes it took Abramane and Tchaga to get certified. Abramane and Tchaga are the first Chadian TCCC trainers teaching TCCC during Flintlock 2019.

U.S. Air Force Capt. Matthew McKinsey, a reservist from Pennsylvania, was a lead instructor for TCCC at Flintlock 2017 and happy to see his former students, the Chadians, step up and take the mantle. “I think the goal of any instructor is that your students apply and then later teach the same skills that you’ve passed down,” he said. “That’s sort of the circle of education. I think that partner nations in Africa appreciate the training that we bring them – and it’s certainly valuable – but it’s always more valuable when you are teaching your own.”

Abramane agreed. “My biggest take away from several Flintlocks is the reality that African countries will benefit more if they are trained by Africans,” Abramane said. “My hope is that at some point we can have 100 percent Africans training Africans and that will make Flintlock a bigger event.”

As more and more African partner doctors and medics benefit from TCCC training, given by members of the DoD and African partner forces, that hope is closer to reality every day.