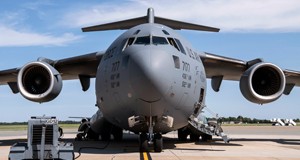 The U.S. Air Force is at a crossroads in deciding to reinvest in its long-proven air transport workhorse, the C-17 Globemaster.

The Boeing C-17 Globemaster III military airlift aircraft is a high-wing, four-engine, T-tailed military transport vehicle capable of carrying payloads up to 169,000lb (76,657kg). It has an international range and the ability to land on small airfields. A fully integrated electronic cockpit and advanced cargo system allows a crew of three (the pilot, co-pilot and loadmaster) to operate all systems on any type of mission.

The C-17 has proven to be a reliable flyer, with a mission capable rate of around 83%. Gen. Maryanne Miller, Commander, Air Mobility Command, Scott AFB, noted that with the Air Force plans to boost its total aircraft inventory, it is possible that there may be a need for additional C-17s. USAF is working to determine what mix of aircraft is needed to get to the 386-squadron goal.

With the anticipated addition of three new C-17 Globemaster III squadrons and the cutting of two C-130 Hercules squadrons, Miller projects that the total number of airlift squadrons in airlift inventory would be up to 54.

U.S. Air Force Air Mobility Command (AMC) is currently modernizing the Consolidated Airdrop Tool (CAT) for its C-17 and C-130 fleets. CAT development efforts are designed to improve the accuracy, speed and safety of AMC’s high-altitude precision airdrops tailored to the specific requirements of the C-17 and C-130 aircraft. CAT will support military airdrop missions of all types around the globe. The Air Force chose the Tapestry/Boeing team to lead the CAT development effort under a Mission Planning Enterprise Contract II (MPEC II) delivery order valued at $26 million. The contract calls for the enhancement of CAT versions over a four-year period utilizing the agile development methodology. The final delivery of primary capabilities is projected for September 2020.

CAT software enables mobility airmen to calculate and plot both conventional and precision airdrop solutions to accurately deliver supplies in remote, austere environments. The software is the mission planning and execution component of the Joint Precision Airdrop System (JPADS) – a key aerial delivery capability for the U.S. military. JPADS uses GPS-guidance systems, steerable parachutes and an onboard computer to steer the loads to a single designated drop zone. It enables the cargo to be released from multiple points to reduce the risk of enemy fire, taking into account factors such as weather, terrain, aircraft capabilities and threats. JPADS includes a dropsonde, a type of probe that’s dropped prior to the cargo to measure wind conditions. CAT receives this data inflight on a laptop, and runs aircraft performance and weather algorithms to determine the best point of release.

Whether their dropping beans or bullets, mobility airmen have always faced uncertainty with precision airdrops. Oftentimes, aircrews only get one pass to make a drop, and there’s a lot that can go wrong. They must consider wind velocity, air pressure, payload mass and parachute drag, all of which can make or break an airdrop mission. Thus, CAT development efforts will reduce uncertainty through advanced data and analytics. In addition to improving accuracy, the development efforts will provide greater automation inflight and workflow enhancements, including touch-screen capability utilizing Windows 10. This will minimize distractions caused by flight tasks in the cockpit, so aircrews can concentrate on the mission at hand.

Other improvements on the horizon include advanced algorithms for hazard/obstruction avoidance, weather assimilation capabilities and airdrop damage estimation. Support for newer parachute systems and configurations is in the works, along with software upgrades that would allow aircrews to drop heavier loads in higher altitudes to avoid threats on the ground.

CAT v6.1 is scheduled for delivery in August 2019 with fielding in December 2019. Future iterations will be delivered leveraging a full agile approach, allowing for continuous advancement of capabilities and immediate feedback from stakeholders each step of the way.

This past June, the Air Force awarded D&D Machinery a $8.9 million contract for the C-17 Globemaster program. The deal is for the Aircraft Engine Ground Handling Trailer, which is required to incorporate I-beam rails to interface with the rollers on the engine cradle. The C-17 is a high-wing, four-engine, T-tailed transport aircraft, that can carry large equipment, supplies and troops directly to small airfields in harsh terrain. The estimated total cost over the lifetime of the aircraft’s program is $328 million to $368 million.

Work under the contract will take place in San Antonio, TX, and has a scheduled completion date of September 18, 2023.

The Air Force is presently looking to increase its aircraft squadrons by 14 by the year 2030. The Service is in initial discussion with Congress regarding concept and funding needs. It’s unclear what other options would exist to increase the number of C-17 squadrons aside from restarting the production line. The Air Force currently operates 222 C-17s, but began retiring some of the oldest Globemaster IIIs in 2012. It may be possible that those C-17s could be taken out of storage and revitalized.