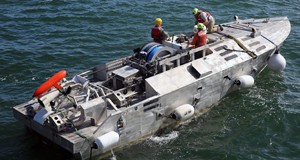 The Pentagon has issued a directive indicating unmanned surface vessel (USV) capability be a key component of future U.S. Navy surface fleet proficiency. Large USVs (LUSVs) will be a part of this effort.

The 2018 National Defense Strategy states that unmanned maritime systems and advanced technologies are demanded in response to projected threats and the Great Power Competition. The ability of peer competitors to deny naval forces freedom of movement drives the need for more ships with increased firepower, distributed over a wider ocean area. Unmanned Surface Vessels (USVs), at a fraction of the cost of manned combatants, provide this additional capacity.

Large Unmanned Surface Vessels, or LUSVs, are being designed as a key component of the Future Surface Combatant Force (FSCF), which includes Large Surface Combatants, Small Surface Combatants and Medium Unmanned Surface Vehicles. A Force-level Analysis of Alternatives will be completed this year and inform the numbers and missions of each component, including LUSV. The Navy’s Design for Maritime Superiority 2.0 also lists LUSV as one of the key platforms to be acquired rapidly and “deliver ASAP” as part of the service’s effort to achieve high-velocity outcomes.

LUSVs will be capable of weeks-long deployments and trans-oceanic transits, and deploying with Carrier Strike Groups, Amphibious Ready Groups, Surface Action Groups, or with single combatants. Fielding of LUSVs will provide high-endurance, reconfigurable platforms with an organic, fully integrated, Navy-developed combat system employing various payloads to augment the Fleet’s anti-surface and strike capability and capacity. LUSVs will be designed to give the Navy increased capability and necessary capacity at lower projected procurement and sustainment costs, reduce risk to Sailors, and increase readiness.

The first block of LUSVs are focused on affordably expanding afloat strike and anti-surface warfare capacity in support of manned surface combatants. LUSVs are a key enabler of the Navy’s distributed maritime operations concept, which includes being able to forward deploy and team with manned combatants, or augment battle groups.

Design through Research and Test

These agencies made early investments in autonomy, endurance, command and control, and payload development, and the results are directly informing the autonomy for these ship designs and ability to upgrade as technology advances. Investment in continued testing and experimentation will improve these efforts. The LUSV effort is utilizing current Navy warfare system programs of record that have been adapted to enable remote monitoring and operational control from either an afloat or ashore command and control point.

In order to characterize hull, mechanical and electrical (HM&E) reliability and ensure autonomous navigation, the Navy needs thousands of hours of testing. Additionally, the Navy needs to develop the man-machine teaming operations, maintenance concepts, and cyber resiliency which require numbers of operational prototypes. These prototypes need to operate on common military command and control networks in order to be relevant in an operational environment.