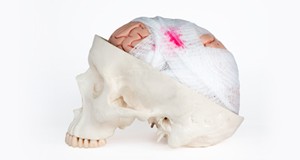 A medical research company has shown an early signal of brain cell protection in traumatic brain injury (TBI) patients with its repurposed drug and is now progressing the preventive treatment program into advanced clinical trials.

Traumatic brain injury, or TBI, is characterized by the demise of energy-producing mitochondria inside brain cells, and subsequent metabolic energy crises, during the acute-care treatment phase that may greatly increase the patient’s brain cell damage and loss and, sadly, eventual disability. Post-traumatic stress disorder, or PTSD, is a TBI follow-on condition, and may also be a metabolic disorder. Research is now demonstrating that protecting mitochondrial energy production inside stressed brain cells during the first few days post-injury could be a critical strategy in minimizing long-term brain damage and disability.

In recent years, cyclosporine (CsA), an established and well-studied immunosuppressant used to prevent tissue rejection in organ transplant recipients, has been found to have promising neuroprotective capabilities in moderate to severe TBI. By protecting neuronal mitochondrial energy production, the pharmaceutical has the ability to appreciably reduce eventual long-term damage.

A 1990s-era published case study of a German teenager hit by a car – a young man who, as it happened, was already using CsA for immunosuppression following a liver transplant – illustrates the point powerfully. At the accident scene, the boy had an initial damage rating (GCS score) of three, and was later found to have multiple lesions in the brain associated with poor outcome. But, amazingly, he was discharged from the hospital five weeks later and went back to school after two months. MRIs conducted five months post-accident showed evidence of residual multiple cortical and subcortical hematomas in both hemispheres of his brain. His attending neurotrauma team suspected CsA may have been a factor in “…the good recovery after severe brain injury in this 14-year-old patient.”

NeuroVive’s recent preclinical study (Journal of Neurotrauma, January 2019), performed on an advanced pig model at the University of Pennsylvania, showed that its CsA delivered an exciting 35 percent reduction in brain injury volume as measured by MRI scans. Furthermore, these studies displayed positive changes in both brain energy metabolite levels and mitochondrial respiratory function, as well as decreased generation of reactive oxygen species (ROS), all key indicators of mitochondrial distress.

Another recent study, the Copenhagen Head Injury Ciclosporin (CHIC), was an open-label small-group Phase 2A study in treating severe human TBI with a goal of establishing the safety and pharmacokinetic profile of two dosing regimens of NeuroSTAT. The results showed that appropriate dose-dependent concentration levels can be measured in the blood and cerebrospinal fluid — confirming that NeuroSTAT reaches the CNS and, importantly, with no unexpected safety signals.

NeuroSTAT’s efficacy was also demonstrated in CHIC through an analysis of brain injury biomarker in patient cerebrospinal fluid samples. Each of the four biomarkers — GFAP, UCH-L1, NF-L and Tau — are considered by the global neurotrauma researcher community to be increasingly reliable indicators of different pathological aspects of TBI. Summary CHIC results showed a time-based change that correlated with administration of NeuroSTAT. These results signal the drug’s promise to contain the debilitating TBI secondary injury phase that leads to mitochondrial destruction.

These emerging TBI biomarkers are critical advances for both the short-term diagnosis and treatment, and long-term care of concussion (mild) and moderate to severe TBI patients. They potentially provide regulatory bodies with evidence-based “endpoint” biomarker tools for evaluating and aiding the development of future pharmaceuticals such as NeuroSTAT. It’s exciting to note that the FDA approved the first-ever biomarker-based diagnostic test for concussion in the U.S. in February 2018. Its ability to measure levels of GFAP and UCH-L1 is an advance that could reduce the need for costly CT radiation scans in diagnosing concussion.

Phase 2 Study Prep and Beyond

NeuroVive is now gearing up for NeuroSTAT’s next step: a Phase 2 proof-of-concept study to evaluate its efficacy and support a pivotal Phase 3 study. The company is working closely with neurotrauma trial-design experts in the U.S. and Europe, and with regulatory bodies such as the FDA, to ensure that the study’s design and target endpoints — MRI and biomarkers, for instance — meet all current and emerging standards. If cyclosporine does indeed demonstrate an ability to reduce TBI brain damage and disability in an acute hospital setting, it would be the first-ever pharmaceutical approved to treat TBI.

Repurposing cyclosporine beyond its decades-old organ transplant legacy to become a powerful treatment for TBI rests on a solid foundation of decades of research, funded by literally hundreds of millions of dollars globally, in conjunction with 20 years of weighty government and DoD investment aimed at generating viable treatments. Now, with the recent development of exciting TBI biomarkers, NeuroVive’s readiness to proceed to a Phase 2 clinical study is well timed. Despite many TBI drug study failures in the past, the global TBI community of researchers, funders and clinicians will observe the development of NeuroSTAT with cautious optimism.