At the Speed of Need 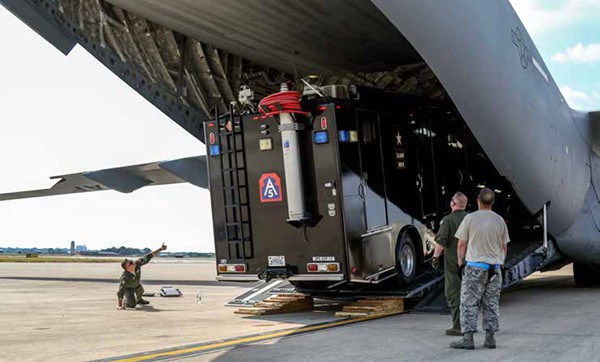 When Hurricane Maria slammed into Puerto Rico on September 20, 2017, few could have anticipated the destruction to key infrastructure, including power and communication systems that would unfold. The immediate need to communicate and share knowledge following Maria was vital to coordinating and prioritizing incoming forces and resources needed to save lives.

Disaster responses like Maria are one of the many reasons why anticipating communication and information sharing requirements is a critical component of U.S. Army North (ARNORTH) and its ability to protect the United States and its interests. Although Homeland Defense is ARNORTH’s top priority, its most visible mission is Defense Support of Civil Authorities (DSCA). If called upon, Army North oversees all Title 10 military land forces as the Joint Forces Land Component Command (JFLCC). During a hurricane response, ARNORTH works closely with the Federal Emergency Management Agency (FEMA) to support requests for
federal military assets such as trucks, helicopters, and medical support. Timely communication, efficient sharing of information, and interoperability are crucial parts of a response. Communication is key to ARNORTH’s ability to successfully command and control military response
forces and tie in with other responding federal, state, and local agencies.

ARNORTH’s Communication Systems Directorate (G6)
is the information technology department charged with
ensuring communication remains ready, reliable, and interoperable
with interagency National Response Framework (NRF) partners
throughout the JFLCC area of operations. Success hinges on Army
North’s ability to get the right information to the right person at the
right time within its command and control structure. During disaster
relief efforts, Army North must operate in a complex, rapidly changing
operational environment that affects Department of Defense (DoD) response requirements to assist civil authorities and interagency
partners. As a disaster evolves, requirements also evolve to meet
demands and manage incoming forces from multiple governmental
and military partners all operating with different information systems.
Technology and clearly articulated requirements are key to proper
allocation of resources.

As ARNORTH was being stood up in 2005 into 2006, the G6 team
worked to meet those communication needs and procured mobile
communication platforms. The goal was to enable mission success
through acquisition of mobile and agile systems capable of quickly
delivering data and voice services on demand, anytime and anywhere
in U.S. Northern Command’s (USNORTHCOM) Area of Responsibility
(AOR). Critical components were interoperability, information sharing,
and collaboration support requiring a whole of government approach
based off existing Army and Joint doctrine and the extension of Army
North’s portion of the Department of Defense Information Network
(DODIN). Network engineers and technology experts worked closely
with a commercial vendor to develop mobile communication platforms
to ensure the platforms could communicate with the Department of
Homeland Security (DHS) and the U.S. Army National Guard.

In addition, the command created a tactical communication
architecture that addressed the communication requirements of its Main Command Post (MCP), Contingency Command Post (CCP), and
ten Defense Coordinating Elements (DCE). The DCEs are co-located with
FEMA in their 10 regional offices to continually plan, synchronize, and train with FEMA and other state, county, and city emergency response
authorities. As a result, the MCP uses a satellite-equipped vehicle that
has internal workspace for the response-critical ARNORTH staff. This
vehicle was coined the Super Sentinel as it uses commercial Satellite
Communications (SATCOM) to deliver Internet, multiple router networks,
commercial voice, video and data services for multiple users. The CCP
uses another platform called the Sentinel. This vehicle is similar to the
Super Sentinel, but includes its own tactical network infrastructure
to ensure its delivery of services is available to the CCP. This allows
personnel to continue to work internally as a staff if communication
links are lost due to unexpected outages or environmental factors. The
Sentinel was used in response to Hurricane Maria to support 160 Joint
users with voice, data, and video services. The Sentinel also has the
ability to extend all communication services from the vehicle to other
facilities as needed.

ARNORTH also uses an Emergency Response Vehicle (ERV) for each
DCE. This Suburban-based communication platform allows the DCEs to
quickly deploy within their region, arrive at a designated location set by
the lead federal agency, establish a tactical operations center, and be able
to communicate in less than 20 minutes. The ERV is comparable to the
Super Sentinel in that it can support up to a number of users with data,
voice, and video services within a compact work space. The platform has
evolved over time and has been effectively life cycled to keep up with
ever-changing technologies. Presently this vehicle leverages its own
satellite transport, existing terrestrial commercial infrastructure, and
cellular capacity in order to load balance the demand on different types
of reach back capabilities. It can run internal communication equipment
with its own generator or shore power where available. All vehicles are
equipped with radio bridging capabilities to communicate with first
responders on various frequencies.

Trends and the Future

ARNORTH understands it must keep up with trending and
developing capabilities and technologies. Recognizing the value of
maintaining robust broadband capabilities, the command continues
to research ways to integrate mobile communication modernization
efforts into its platforms. While sustaining Northern Command’s
environmental framework that supports interoperability with DHS and
the National Guard, Army North envisions leveraging public sector
priority services, utilizing existing cellular 4G LTE capacity, and the
next generation of cellular service, 5G. Lessons learned from past
contingencies have helped develop dismounted transport capabilities
to support split-based operations and allow ARNORTH the flexibility
and agility to provide scalable communication services from small
initial entry teams to Joint Task Force elements. Another leading trend
is the ability to leverage a National Security Agency (NSA) developed a
platform which provides DoD a flexible wireless capability that can be
utilized by our mission partners while ensuring complete separation of
multiple networks.

During Hurricane Maria, the immediate need for more than 17,000
DoD response forces to communicate and share information with
their civil authority mission partners proved to be a crucial part of
synchronizing and prioritizing disaster response operations. It also
provided leaders with the information needed to identify, prioritize,
and place capabilities where military forces would be most effective
to save lives. To remain current and value-added within a whole of
government approach, ARNORTH will remain disciplined in consistently
implementing the full spectrum of communication tactics, techniques,
and procedures while continuing to lean forward in obtaining secure,
agile, and modular technologies that are scalable to deliver immediate
communication capabilities.