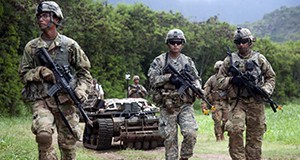 Both physical and nonphysical threats in the land, air, maritime, space, and cyberspace domains continuously challenge the Army’s achievement of future superiority. The Army Futures Command is now on the scene to ensure the Army leaps ahead — and stays ahead — of these multi-domain threats.

Tempo and complexity. If there were two single characteristics that illuminate the key technological and strategic challenges that threaten the Army’s ability to ensure a superior force in the future, tempo and complexity would make the short list. The Army’s Multi-Domain Operations concept explicitly recognizes this complexity by noting that “U.S. supremacy is increasingly contested in the land, air, maritime, space, and cyberspace domains.” Global and accelerating advances in science and technology, increasingly accessible by adversaries, are leading to unprecedented tempo in both the physical realm (e.g., highly maneuverable robotics, precision munitions) and the information realm (e.g., rapid pattern recognition, data mining, and decision-making fueled by artificial intelligence and machine learning). How will the Army maintain supremacy in light of accelerating tempo and complexity in multiple domains? Answer: by fundamentally transforming its culture and processes to catapult a concept to a validated warfighting capability. The Army future force modernization enterprise demands cultivating new processes that don’t just keep pace with technological change but also are designed to leap ahead and stay ahead of the capabilities of our adversaries.

Historically, the Army has approached new threats, challenges and opportunities by framing the problem as a mission. The Army Futures Command (AFC) was conceived to institutionalize the mission of the Army future force modernization enterprise — to ensure pervasive overmatch. Every mission needs a strategy, and AFC’s strategy is to integrate the future operational environment, threat and technologies to develop and deliver future force solutions. AFC seeks to strike a balance between materiel capabilities and operating concepts to deliver complete, validated and effective Warfighter “solutions.” This strategy includes ensuring the best talent, practices and capabilities are united to deliver timely and effective force modernization outcomes, offsets and overmatch.

Finding a Home for the Army Futures Command

Officially launched on July 1, 2018, AFC is in its initial operating capability phase. The Army has not undertaken a reorganization on the scale of AFC since 1973. As the fourth and newest Army four-star command, AFC is tasked with “driving the Army into the future to achieve clear overmatch in future conflicts.” The Army recognized, as have numerous DoD board recommendations, the Decker-Wagner report, General Accounting Office reports, and independent public and private studies, that there is a gap between the ever accelerating pace of science and technology and the ability of DoD’s “traditional,” industrial-age acquisition process to strategically identify, respond and close those gaps. The Army also recognized that attracting and developing talent were critical — especially in innovative science and technology areas where the Army must compete for limited and specialized pools of talent. As such, the Army developed a set of criteria that focused on selecting an urban hub that would attract talent by being close to diverse technology companies, universities and business incubators, and could provide access to a variety of science, technology, Engineering and Math personnel and affordable research and development infrastructure.

Though numerous cities across the U.S. were considered, ultimately Austin, Texas was selected as the location for the AFC. AFC is scheduled to achieve its full operating capability in the summer of 2019. In addition to being located between major military bases in Killeen and San Antonio, Austin also hosts Army Research Laboratory’s (ARL) extended campus, which had already established a footprint at the University of Texas at Austin in November 2016. Prior to AFC, the U.S. Army Research, Development and Engineering Command (RDECOM) ARL had created the collaborative hub in Austin to strategically access unique research and development capability in the southwest United States, just as its hubs in Los Angeles, Boston and Chicago enable access to expertise and capabilities unique to those geographical regions.

Creating an Aspirational and Collaborative Culture

As noted by COL Patrick Seiber at the initial announcement, the factors considered in selecting an urban location for AFC headquarters included “talent, high quality of life, innovation hubs, and money spent for research.” He shared that “one of the things we determined we’ve got to be able to do is immerse ourselves in the culture with these innovators and we can’t do that if we stay in our walled posts and installations.” Though Austin will eventually be home to the AFC headquarters, it is important to recognize that the vast majority of the AFC personnel will remain in their current locations across the U.S. As noted by the Under Secretary of the Army Honorable Ryan D. McCarthy, “This is not about moving lots of people from other commands. … [The] Army Futures Command can be best characterized as a restructuring and de-layering to maintain the ‘best in breed’ in all military capabilities.”

Thus, perhaps more than ever, creating a new and inclusive AFC culture that inspires and connects the best ideas, talents and processes from its entire workforce and industry/academia is paramount. AFC is designing fundamentally new processes that bring expertise in concepts, requirements, research and development, and testing together earlier and often. Iterative concept generation and prototyping, together with virtual and physical experimentation, will allow foundational research from both Army labs as well as industry and academic partners to be rigorously assessed for their conceptual warfighting potential to defeat a future threat or enable a new capability. AFC recognizes that the Army alone does not have a monopoly on exploiting advances in science and technology. Hence, with aggressive and strategic collaboration and venturing across multiple innovation networks, AFC will speedily identify where it should invest its resources and where it should leverage efforts to cost-effectively achieve truly unique and needed future Warfighter outcomes.

Unity of Command, Unity of Effort

At the center of the AFC is a sharply focused goal to bring unity across disparate but complementary elements of the Army future force modernization enterprise. Unity of Command, enabled by analytically driven fusion of data and information, will allow senior Army leaders to minimize the time needed to make effective and critical decisions that will enable the future force. In addition, new processes and governance will allow empowered decision-making at appropriate levels across AFC, minimizing delays in executing a wide range of programs and efforts. Unity of Effort is intended to move the Army out of its current “silos and stovepipes” to a highly integrated and prioritized set of outcome-focused processes that provide early feedback, adoption and maturation of promising concepts and technologies.

There are three highly integrated, major focus areas in AFC. The first focus area will lead the careful collection, development and assessment of data, forecasts and concepts to clearly identify and prioritize future needs and opportunities. Based on these prioritized needs, the second focus area begins the process of conceptualizing new and effective solutions that use iterative and integrated experimentation and prototyping to generate knowledge. This knowledge enables innovative “materiel” development and operating concepts to deploy the materiel effectively. Finally, the third focus area refines and engineers the materiel so that it can be scaled for stable, reliable manufacturing and fielding.

To ensure rapid management of both issues and opportunities, the AFC Fusion and Integration Center (FIC) will serve as AFC’s “nervous system.” Composed of representative experts from the diverse elements of AFC, the FIC will monitor, assess, and fuse information vertically between the Department of the Army senior leaders, AFC headquarters and the suborganizations, and horizontally across the suborganizations and external seams within the Army (e.g., the Training and Doctrine Command , Forces Command , and the Army Materiel Command as well as external partners (e.g., industry, academia and other government agency interfacing). AFC is developing metrics, analytics and an integrated information “dashboard” that will allow the FIC and the AFC as a whole to quantitatively and qualitatively assess the modernization enterprise. These metrics will include, but are not limited to, assessing tempo/speed, quality and effective use of resources to ensure timely delivery of strategic and “best of breed” warfighting solutions.

AFC will provide new and more efficient pathways to connect with both established and emerging strategic partners to better achieve, implement and sustain Army modernization outcomes. These partners include other ACOMs such as U.S. Army Training and Doctrine Command, Army Forces Command, and Army Materiel Command, as well as the Army Special Operations Command, Medical Research and Materiel Command, the Army Engineer Research and Development Center, and the Army Space and Missile Defense Command.

However, AFC will also seek entirely new modes to develop strategic partnerships to identify and accelerate technology development. For example, AFC’s Army Applications Laboratory will focus on opportunity-based development that employs novel business methods and authorities to accelerate the discovery and implementation of technology for both known and revolutionary new Army applications. Finally, AFC will seek new and innovative ways to engage and share with other DoD technology communities and accelerators such as the Defense Advanced Research Projects Agency, Defense Innovation Unit Experimental, the Defense Innovation Board, the Army Venture Capital Initiative and the Army Science Board.

The Army Futures Command will be a learning command — one that will create and encourage a culture of experimentation not just in its laboratories or testing facilities but also anywhere and everywhere a demonstrable improvement can be made in the Army future force modernization enterprise. Innovations can include not just new robots that can maneuver flawlessly in highly contested and congested operational environments but also the use of new acquisition authorities to speed procurement, new local and national partnerships to attract critical talent, and strategic leveraging of industry, academia and other government agencies to deliver more complex, resilient and integrated warfighting capabilities. The rapid pace of science and technology advances, together with our adversaries’ growing ability to exploit such advances, demands that we take action. Thus, the mission of the AFC is to provide our Soldiers the weapons and equipment they need, when they need them, to ensure clear overmatch and success on future battlefields.