Aerosonde: At Work in any Latitude 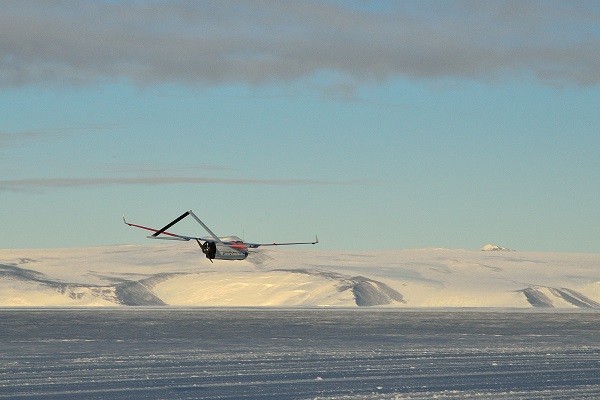 How UAS can assist non-military projects regardless of conditions.

Textron Systems’ Aerosonde Small Unmanned Aircraft System (UAS) has logged tens of thousands of hours for the U.S. military. The “Group II” system, weighing between 50 and 75 pounds at takeoff, is launched expeditiously either on top of a vehicle or by catapult and recovered through a net or belly landing. Aerosonde, according to Textron, is the only unmanned aircraft in its class using an FAA-certified manufacturer (Lycoming) to make its engine. In the civil market, Textron sees potential for the Aerosonde in agriculture, surveying, mapping, infrastructure monitoring, and border security, among other commercial market areas.

Aside from military uses, Aerosonde has shown its worth on either end of the globe—in the Arctic and Antarctica—and in a range of weather conditions over the past two decades. For a 2012 University of Colorado Antarctic expedition, Textron outfitted an Aerosonde system with meteorological instruments to measure pressure, temperature, relative humidity, winds, radiation, surface temperature, ice thickness, and glacial marking.

“We’ve worked in Barrow, AK, in -40 degrees Fahrenheit,” Dave Phillips, vice president of small and medium endurance UAS at Textron, said. “We’ve learned [the importance of] having good data on your system.” Telemetry information is streamed to the ground control station so critical airborne sensors are monitored in real time. Engineers have used this information as a feedback loop to improve the system over the long-term, creating a robust system without a myriad of aircraft variants.

Aerosonde engineers learned about the mechanical and electrical properties that change due to weather by going to different places and finding out what happened. “The feedback loop cycle and the intelligence of our telemetry provided us the framework to do a systems engineering job that created an aircraft that can go from one extreme to the other,” Phillips said. This feedback loop is particularly important in the Arctic, where dampness, salty air, and extreme cold are quite harsh on airframe components, electronic payloads, and optics.

The system is known for endurance and adaptability. In 2006, the Aerosonde set a world record for its class by staying in flight for 38 hours without refueling, and typical configurations permit over 14 hours of endurance with a data link range of approximately 100 km. Textron is working on shipboard launch and recovery using a “roll on, roll off” system that does not require modifications to the vessel.

“We know how to launch and recover from many different kinds of ships,” Phillips said. “The ships we operated on ranged from small to large, and we know that space is very limited. Our footprint takes into account a small space claim.”

Top photo caption: An Aerosonde in flight in Antarctica

This article originally appeared in the Fall 2014 issue of Unmanned Tech Solutions.