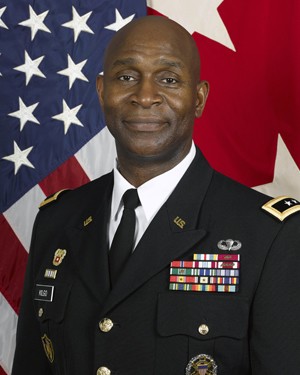 As the commanding general for a 9,000-person, two-star global command and the senior commander of a 28,000-person military base, General Kilgo serves as the U.S. Army’s command, control, communications, computers, cyber, intelligence, surveillance, and reconnaissance (C5ISR) materiel integrator. He is responsible for enabling the U.S. Army’s warfighting readiness by providing sustainable global C5ISR support.

Raised in Newport News, Virginia, General Kilgo entered active duty in January 1988 after graduating from Virginia Union University with a Bachelor of Science degree in Mathematics and Natural Sciences. He also holds a Master of Science degree in Systems Technology, (Joint Command, Control, and Communications) from the Naval Postgraduate School and a Master of Science Degree in National Security Strategy from the National War College.

His most recent assignment was as the J6 for the United States Central Command (CENTCOM) where he oversaw the implementation and management of the global communications and computer networks for the Central Region.

A&M: Tell us about your role as CECOM commander and the command mission.

MG Kilgo: My position is unique in that I serve as both commanding general of CECOM and senior commander of Aberdeen Proving Ground (APG), Maryland. APG is a major technology center for the Army, with more than 21,000 employees and more than 90 tenant organizations working mostly in command, control, communications, computers, cyber, intelligence, surveillance and reconnaissance (C5ISR); research and development; test and evaluation; chemical and biological defense; and public health sciences.

CECOM is part of the C5ISR community at APG, which also includes the Combat Capabilities Development Command (CCDC) C5ISR Center and the Network Cross-Functional Team (both part of Army Futures Command); Program Executive Office Command, Control, and Communications-Tactical (PEO C3T); and Program Executive Office Intelligence, Electronic Warfare, and Sensors. Your astute readers might recognize there’s a new “C” for cyber in our acronym. That reflects how security has become really foundational to everything our community does, at every stage of the technology life cycle.

Within the C5ISR community, CECOM maintains hardware and software systems for the sustainment tail after they are fielded, which can account for up to 70% of a program’s life cycle cost. We also sustain Army Enterprise Resource Planning systems (ERPs), which house business data. Sustainment is critical, because even the most advanced platform can be vulnerable or even non-mission-capable if it’s missing a critical part or security update. That puts mission success and Soldiers’ lives in jeopardy. It’s advantageous for us to be co-located with other C5ISR organizations at APG, because it helps us plan together for the long-term sustainment of systems early in the acquisition process.

A&M: From an accountability perspective, talk about some of CECOM’s focus areas in addressing Army Materiel Command (AMC) goals.

MG Kilgo: The return to great power competition and strategic deterrence has forced us to rethink the “business as usual” mentality that guided much of our last two decades at war. For my boss, AMC Commander GEN Gus Perna, the name of the game is the Strategic Support Area (SSA). The SSA is AMC’s area of responsibility within multi-domain operations (MDO), the Army’ new operating concept that looks at the battlespace as a single combined entity across land, air, sea, space and cyberspace. Simply defined, the SSA is where combat power is generated, projected forward and sustained in MDO. The SSA concept has become central to everything AMC does, and because CECOM is a major subordinate command to AMC, the same holds true for us.

Relative to SSA, we have several lines of effort. Supply availability is a big one: ensuring our Soldiers have the right part at the right place at the right time. When GEN Perna took command of AMC in 2016, he ordered CECOM to pursue 100% supply availability, and we took that and ran with it. We devised new ways to segment different populations of readiness-driving parts, and we’re using a new projection tool to reverse engineer when we fail to hit a target. Those efforts to see ourselves are paying dividends. In fiscal year 2017, supply availability was 77%, but it rose to 84% the next year and 90% at the end of fiscal year 2019. And we’re not letting off the gas.

We’re also making strides in logistics information readiness, another SSA priority area. Army business data is often stovepiped across multiple ERPs, and traditionally, so are ERP support operations such as service desks. The CECOM Software Engineering Center (SEC) is responsible for sustaining those ERPs, so we established the Army Shared Services Center to centralize support teams and bring standardized tools and processes together under one roof. This is an important complement to the work AMC and Program Executive Office Enterprise Information Systems are doing to better connect ERPs to improve business users’ ability to get and apply the data they need.

Industrial base readiness is a third SSA priority area, and our focus is on the Tobyhanna Army Depot, CECOM’s organic industrial C5ISR repair and overhaul facility in Tobyhanna, Pennsylvania. Tobyhanna serves customers across the joint forces, and it saw its workload rise 35% in fiscal year 2019. It’s kept up thanks to 500 new employees hired in fiscal year 2019 and improved sales and operations planning. Together, these efforts have led Tobyhanna to improve its Performance to Promise, a measure of its ability to deliver services on time, from 49% in fiscal year 2015 to 97% in fiscal year 2019.

Another SSA priority is strategic power projection, in which our focus has been equipping Army Prepositioned Stocks (APS) with modernized, division-size sets of C5ISR equipment. This has been especially important in the lead-up to the DEFENDER-Europe 20 exercise in the spring, the largest deployment of U.S.-based forces to Europe in more than 25 years. The exercise is intended to validate the draw, use and turn-in of configured-for-combat equipment sets from APS in Europe. In many ways, it is a test of AMC’s capability and capacity to “own” the SSA and see ourselves. Our troops shouldn’t spend any time working on equipment when they arrive — they need to be able to do a quick status check and be on the front lines with their gear immediately.

A&M: As the Army continues its transition to BCT combat level emphasis, how is CECOM keeping the focus on comms assurance to ensure mission readiness?

MG Kilgo: One of our biggest current efforts is working with the Network Cross-Functional Team and PEO C3T to plan for sustainment of the future Integrated Tactical Network (ITN). The ITN is designed to be more resilient in contested and congested environments, more expeditionary and easier for Soldiers in use. PEO C3T is fielding the system in two-year capability sets beginning in 2021. Each capability set is infused with equipment procured via middle-tier acquisition (MTA) authority, which enables more rapid fielding.

However, these MTA systems have a huge variety of warranty durations, conditions and pathways for Soldiers to exchange non-functional equipment still under warranty. This is a challenge from a logistics and sustainment standpoint, so CECOM is implementing a plan known as 5-3-1 to address it. “Five” refers to the five-year warranty the Army will pursue for all new MTA equipment. “Three” refers to the year-3 decision point, at which point the Army will decide if it will sustain the equipment after the initial warranty period ends. And “one” refers to the central warranty exchange center, the Tobyhanna Army Depot and its more than 40 forward locations worldwide.

Another major focus is the ability to surge in case of a return to large-scale combat operations. For supply availability, we are partnering with Army Contracting Command, the Defense Logistics Agency and the industrial base to build better contract responsiveness and surge capacity. This includes moving to longer-term, 10-year contracts that procure from multiple supply sources. These contracts feature language for surge production and expedited delivery in case contingencies come up. At Tobyhanna, the Army is making major modernization investments — nearly $850 million from 2009 through 2022 — which are also improving its surge capacity.

Finally, we are working to repair and return mission-critical C5ISR equipment to Soldiers faster than ever before. In 2018 and 2019, we established depot maintenance forward facilities in Korea, Europe and three CONUS locations. The intent is to bring depot-level repair capabilities closer to where units are stationed. We are also creating repair cycle floats for the highest-priority C5ISR systems. Repair cycle floats are pools of ready-to-issue equipment that are immediately available to units if their systems break down. This is in lieu of sending non-mission-capable systems to Tobyhanna, repairing them, and shipping the same systems back to units, a process that can take months.

A&M: Given the Chief of Staff of the Army’s No. 1 priority is people, what is CECOM doing to empower its workforce?

MG Kilgo: People are the heart and soul of CECOM, which has a 99% civilian workforce. Guided by our Human Capital Strategic Plan, we’re executing a number of efforts to cultivate a diverse, equipped and resilient team of professionals.

For example, our SEC is scheduled to begin sustaining 25 new systems by 2025. However, it doesn’t have the skill-sets in sufficient quantity to sustain these systems, and contract support is extremely expensive. So beginning in 2019, it began a revolutionary program to retrain and cross-train employees in areas such as software programming, database administration and cybersecurity. Selected employees undergo three to nine months of classroom instruction, followed by 60 to 120 days of on-the-job work with subject matter experts to apply what they learned. It’s a vote of confidence in the nearly 100 employees who have participated so far, and we expect that figure to grow significantly.

We are also working with local educational institutions to equip young people with the 21st century skills they need for successful careers at CECOM and APG. Among other programs, our annual two-week Real-World Internships in Science and Engineering program invites nearly 40 local high school students to work in SEC and CCDC C5ISR Center labs every summer. I am also excited about our upcoming P-TECH initiative with Harford County (Maryland) Public Schools and Harford Community College. The program engages high school students to receive their diploma and associate’s degree in four to six years, at no cost, and it includes an IT- and cyber-focused internship at APG.

A&M: From a partnering perspective, how is CECOM leading Army/Joint DoD efforts to work more closely with industry?

MG Kilgo: Public-private partnerships (P3s) help sustain the industrial base by fostering cooperation and teamwork and reducing costs. One of their big advantages is that they help us build our capacity in-house while leveraging private industry support and expertise as needed. Two CECOM major subordinate commands are designated Army Centers of Industrial and Technical Excellence (CITEs): Tobyhanna Army Depot and the SEC. The CITE designation is important, because it allows organizations to enter into formal P3s.

It’s most widely used at Tobyhanna Army Depot, which has 32 active partnerships and is pursuing more than 50 more. It recently entered into its biggest P3, a seven-year agreement with Lockheed Martin to repair more than 90,000 pieces of hardware for the Instrumentable-Multiple Integrated Laser Engagement System family of training devices. The system uses lasers and blank cartridges to simulate battle. Tobyhanna employees work on the devices themselves, and a Lockheed team is on-site to handle logistics like receiving, warehousing and shipping.

The SEC also recently completed its first-ever P3, a 24-month engagement with Chemring to provide software assurance and documentation support for the Husky Mounted Detection System. It uses ground-penetrating radar to protect Soldiers from IEDs.

MG Kilgo: There’s a quote from GEN Perna that resonates with me: “The difference between being ready and reacting will be measured in the number of lives lost.” It’s a great reminder that there’s no room for complacency in our business, which is all about projecting combat power. We’re a profession of arms, and when our Soldiers deploy, CECOM goes right alongside them, providing critical field support and forward repair. We take the Chief and the Secretary’s priorities of people, reform, readiness and modernization seriously. The men and women of CECOM inspire me every day, and it’s the privilege of a lifetime to serve as their commanding general.