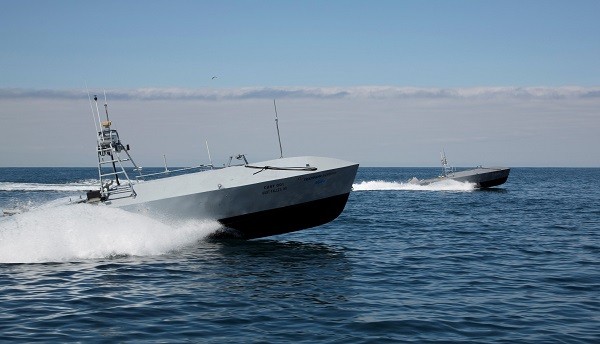 The U.S. Navy’s most talked about acquisition program, the Littoral Combat Ship (LCS), is, at $500 million per vessel, relatively inexpensive for a modern warship. With a crew ranging in size from 50 to 88, the LCS is designed to control coastal areas with speed, diverse mission packages, and shallow draft that destroyers and cruisers lack. Littorals, however, can be very dangerous, and U.S. adversaries are adjusting their strategies to deny access to them. Regardless of the LCS’ lower cost and smaller crew, the Navy does not want to put ships at risk in the face of asymmetric threats.

One such threat the U.S. Navy wants to counter is sea mines. These cheap and easy-to-produce moored bombs affected U.S. operations in the Persian Gulf in 1991, and have sunk 14 U.S. Navy ships since World War II. Floating mines are widely considered a potential terrorist weapon in a harbor or shipping lane. States such as Iran have threatened to mine heavily trafficked waterways as well. Such action could significantly disrupt commerce, even without sinking a single ship. Current U.S. Navy anti-mine equipment includes the MH-53 Sea Dragon helicopter and Avenger-class mine countermeasures (MCM) ship, both of which are nearing the end of their service life.

In response, the U.S. Navy is developing an MCM capability for the LCS. Part of this capability is the Unmanned Influence Sweep System (UISS), which requires an inexpensive, semi-autonomous, and long-endurance unmanned surface vessel (USV) to counter acoustic and magnetic mines using an influence system. Subsequent increments will include mine hunting and neutralization and multi-mission capability. These boats would have to be small—approximately 10 tons—in order to operate from an LCS. The Navy has asked for final UISS proposals from a number of companies, and the engineering, manufacture, and development portion is supposed to finish before FY 16.

Though an undersea vehicle would be stealthier, having a relatively inexpensive USV operate in, as the saying goes, the “dull, dirty, and dangerous” role of minesweeping makes sense, particularly if the vessel might be sacrificed at any time. “In my opinion, one of the reasons the MCM mission is first out of the chute is that’s not where you want to have people,” said Bill Leonard, director of unmanned surface systems at Textron Systems. “In the sweeping- and hunting-type mission, you cover vast amounts of ocean, and you need to survive the detonation of a mine.”

Dave Antanitus, a retired Navy rear admiral and business development manager at Leidos, reinforced this point in an article for National Defense magazine last April: “[S]urface vehicles are much simpler to build and carry more useful payload per dollar than undersea vehicles … Operating on the surface enables sensing and communicating in the acoustic domain underwater and the radio frequency domain above water, providing real-time connectivity and relevance to the rest of the battle force. The bottom line is that [USVs] provide a distinct cost and performance advantage in any mission that doesn’t require the extreme stealth of an underwater platform.”

The U.K. Royal Navy is also investing in new MCM technology. A small team based in Portsmouth is testing a system comprising a small surface vessel called the Hazard that launches an autonomous underwater vehicle (AUV), which the Royal Navy says can scan “far more” of the ocean than current methods. After data collected by the AUV is analyzed by experts, another small submersible that’s controlled by a specialist can destroy any mines that have been located.

With plans to fit the system on the Royal Navy’s current MCM ship (and eventually on any large vessel), the British envision this capability as globally deployable by transport plane in 48 hours. Though the Hazard is now a manned vessel, there are plans to pilot it  remotely and recover the submersibles autonomously in the coming months. 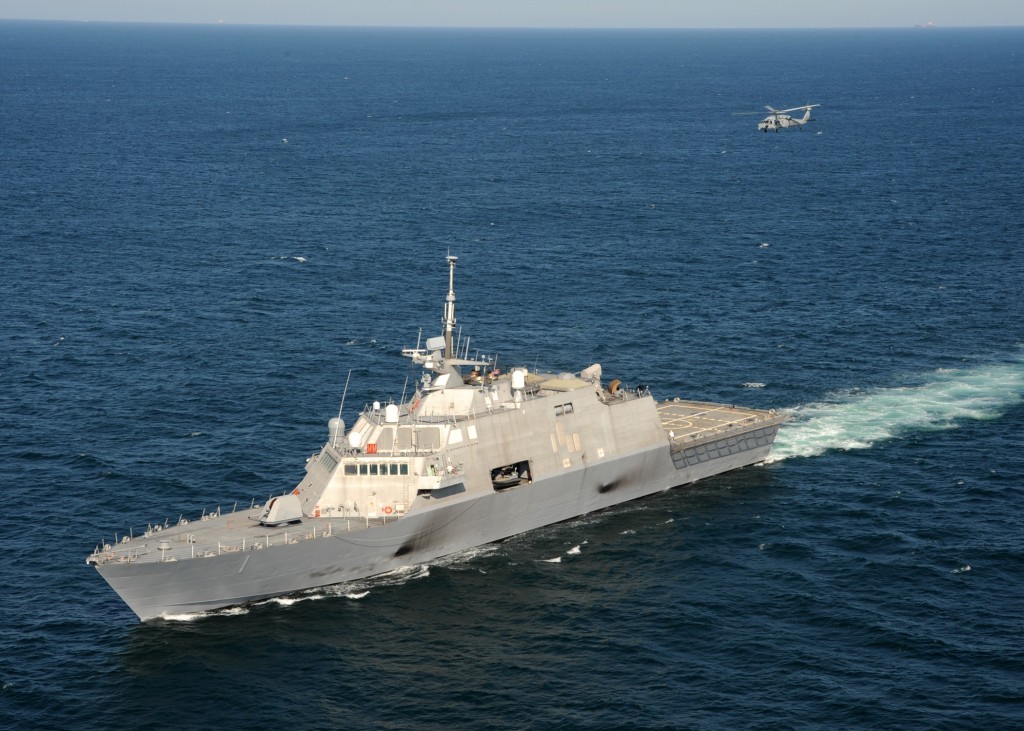 Despite the long history of remotely operated underwater vehicles and the more recent rise of unmanned aerial systems, USVs have not yet been procured in significant numbers by any navy. “The surface part of unmanned technology is where aircraft were a decade ago, [including the] fear of the unknown,” Leonard said. “You have to prove to yourself that you’re safe on the surface with all the checks and balances and design that can handle the environment.”

This includes rough seas. The small size of the boats—around 11 meters—is contingent upon what the LCS can support, and makes the seaworthiness of these USVs questionable. Antanitus expressed his concern in stark terms: “Unmanned surface vehicles of this size have minimal payload, range, and open-ocean seakeeping capability, which will constrain their ability to conduct meaningful operations at any significant distance from the host platform.”

Leonard is more sanguine. Textron Systems’ Common Unmanned Surface Vessel (CUSV), which the company proposed for the UISS program, is designed to operate in sea state four (1.25 to 2.5 meter waves) and survive in sea state six (four to six meter waves). Textron Systems has outfitted its fourth-generation CUSV with improved propulsion for better range, speed, and endurance. The company has also added an improved hull for increased flexibility, strength, and stability.

The CUSV is not a new system, but it does represent an evolution that extends beyond its years of official development. The vessel’s 1,800 hours of in-water operations are bolstered by its use of proven unmanned aerial vehicle command and control programs. Textron Systems has demonstrated the CUSV for the U.S. Navy four times thus far (with another upcoming), and Leonard considers the system proven for the MCM role—including mine hunting and neutralization—as well as other missions such as harbor security and intelligence gathering.

CUSV and similar vessels can be piloted remotely, but dependable autonomous operation is a necessary next step in USV evolution. Unlike submersibles, surface vessels—especially those operating in heavily trafficked littorals—must contend with other vessels and numerous obstacles, and autonomy software that follows international collision avoidance regulations (COLREGs) is still a work-in-progress. Deploying a safe, effective, autonomous USV requires accurate and reliable sensors (e.g., radar, electro-optical/infrared) to detect and classify objects.

According to Antanitus, the DoD has worked successfully on an autonomy system that “uses the concept of ‘velocity obstacles’ to develop a map of speed and range combinations that are COLREGs compliant … The autonomy system continually selects the best course and speed to meet mission objectives within the constraints of COLREGs.”

Textron Systems is tackling this issue by using different levels of control, which Leonard called “sliding autonomy.” The first level,  called “man on the loop,” involves an operator near the boat using a handheld controller. The next option, called “man in the loop,” has a universal command and control system that’s similar to UAVs; an operator can either steer the boat or input waypoints. Next is “man watching the loop,” where pre-programmed mission planning files or waypoints are inputted and the vessel executes these commands. If something happens that requires the operator’s attention, he or she can take control. Finally, supervised autonomous operations involve the autonomy software “logic in the boat itself for obstacle detection and collision avoidance,” according to Leonard. He added that this technology currently “works,” but the COLREGs still require an operator to be enmeshed.

“Sliding autonomy allows [the user] to go to different levels of autonomy,” Leonard said. “All those capabilities can exist all at the same time. Depending on your current operations, you’re able to have flexible decision making. If you want to, [you can] take control with the handheld device or override with the control station. All of these are active simultaneously and you choose which one you want to be in.”

Though this magazine was unable to obtain a full list of contenders for the UISS contract, the market for USVs of this nature appears to be competitive. The MCM mission interests a number of militaries around the world, and the potential for port patrol and even offensive operations is growing. Below are a few systems that captured our attention:

Rafael Advanced Defense Systems of Israel makes the Protector USV, which has been deployed off the coast of Gaza during operations against Hamas. The system features remote controlled and autonomous capabilities. The Protector has a stabilized weapons platform and four mission modules: anti-terror force protection; intelligence, surveillance, and reconnaissance (ISR); surface warfare (e.g., MCM, electronic warfare); and port security.

This article originally appeared in the November 2014 issue of Unmnned Tech Solutions which was a double issue with Armor & Mobility.